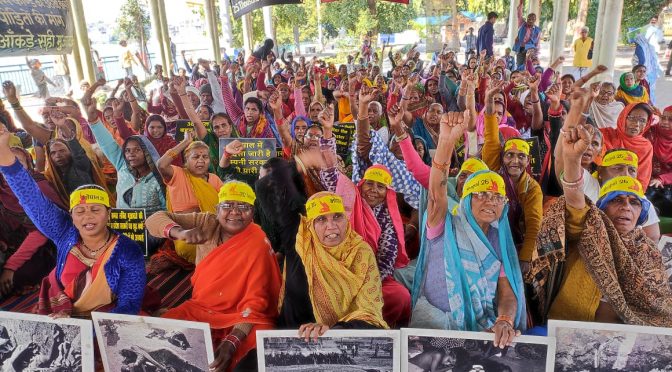 10 women survivors of the 1984 Union Carbide gas disaster in Bhopal today began their indefinite fast without water demanding proper additional compensation for deaths and injuries caused by the disaster. Addressing a press conference, leaders of the five survivors’ organizations leading the Satyagraha said that the Bhopal survivors will be denied proper compensation once again if the central and state governments do not revise figures of death and extent of injuries in the soon to be heard Curative Petition for additional compensation from Union Carbide and its owner Dow Chemical.

Rashida Bee, president of the Bhopal Gas Peedit Mahila Stationery Karmchari Sangh said “Our ten brave sisters who began their waterless fast today are from low caste Hindu and Muslim families below the poverty line. All of them continue to suffer from chronic exposure induced illnesses and most have lost their family members due to the disaster. Some have children and grandchildren with congenital malformations. Yet, like 93 % of the affected population, they have been paid only 25 thousand Rupees for injuries caused by the disaster.”

“After arbitrarily stopping the registration of death claims in 1997, the government is telling the Supreme Court that only 5295 people died due the disaster. Official records clearly show that thousands of people continue to die from illnesses caused by the disaster after 1997 and the actual figure of death is close to 25 thousand. The party ruling the state and central governments, that is downplaying the death figures, is close to Dow Chemical that is known to have contributed to the party’s campaign funds.” Said Balkrishna Namdeo, president of the Bhopal Gas Peedit Pensionbhogee Sangharsh Morcha.

Speaking on the waterless fast by the women survivors, Rachna Dhingra of Bhopal Group for Information & Action said, ”Our Satyagraha is to ensure that the Supreme Court bench that is to hear the Curative Petition on January 10, can know about the true magnitude of the damage wrought by the American corporations. We did our best to get permission from the police authorities for our peaceful protest but have been told that we have to leave by 4 PM today. The government is doing its best to mislead the apex court of our country regarding the world’s worst industrial disaster and we are being threatened with police action for speaking out against this.”

Alleging corporate – government collusion, Nawab Khan of Bhopal Gas Peedit Mahila Purush Sangharsh Morcha said, “ To help Dow Chemical escape liability, the Supreme Court is being told by the government that more than 90 % of the people who got exposed to Union Carbide’s deadly gas have been only temporarily injured. The government has chosen not to present hospital records and research data that show that those exposed actually suffered permanent injuries and chronic diseases. Official records show that 95 % of the gas affected people who got cancers and 97 % of those who suffered fatal kidney diseases had been categorized as temporarily injured. The overwhelming majority of the gas affected population is Muslim and low caste Hindu, this seems to be the other reason the government is not interested in presenting the true extent of health damage caused to the survivors.”

Said Nousheen Khan of Children Against Dow Carbide, “Earlier this year, the Minister of Chemicals and Fertilizers who is in charge of matters related to the Bhopal disaster, has promised us to do the right thing. So has the principal secretary of the Department of Bhopal Gas Tragedy Relief & Rehabilitation in the state government. Neither of them would however, let us know whether the figures of deaths and extent of injuries have actually been revised in the Curative Petition.”