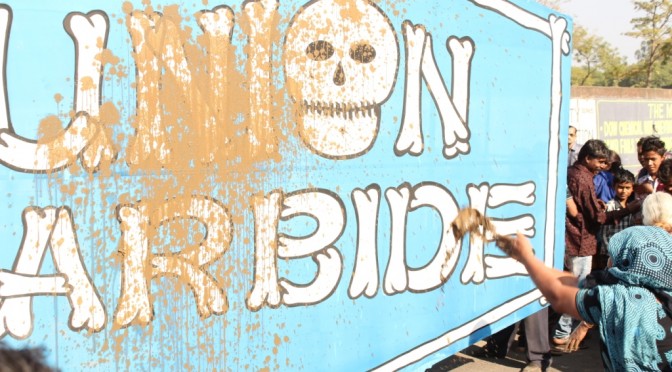 Hundreds of survivors of the 2-3 December 1984 Union Carbide disaster in Bhopal and their supporters from different parts of the country and the world marched in a rally to the abandoned Union Carbide factory today. They were joined by a large number of residents of the communities who are affected by poisoning of ground water from the chemical waste dumped in and around the factory. The protesters smeared mud over logos of Union Carbide and Dow Chemical.

The organizations charged the state and central governments of protecting the interests of the American corporations. They said both governments continue to be deliberately negligent towards the medical care and economic and environmental rehabilitation of the survivors and the contamination exposed people.

According to the organizations, several reports of the Supreme Court Committee for Medical Monitoring have exposed the miserable state of health care of the survivors. They said that the Committee’s reports highlight the lack of specialists and doctors, standardized treatment protocols, quality medicines, diagnostic equipment and system of monitoring health status in the hospitals meant for gas victims.” It is indeed disgraceful that the central and state governments continue to ignore the recommendations of the Monitoring committee.” said Rashida Bee, President of the Bhopal Gas Peedit Mahila Stationery Karmchari Sangh.

Balkrishna Namdeo of the Bhopal Gas Peedit Nirashrit Pensionbhogee Sangharsh Morcha condemned the state government for reintroducing loan schemes as a means to provide economic rehabilitation. “Several thousand survivors were given loans following the disaster but it only caused indebtedness without providing steady income. Instead of providing vocational training and placement support the government is now thoughtlessly bringing back the failed loan scheme.” he said.

Nawab Khan of the Bhopal Gas Peedit Mahila Purush Sangharsh Morcha said that the Indian government’s neglect of the survivors of Bhopal is most glaring in its apathy towards the generation of victims born after the disaster. “The Supreme Court in its October 3, 1991 judgement had directed the government of India to provide medical insurance coverage of 100, 000 children born to gas affected parents. Not a single child has been provided coverage till today.” he said.

“The Supreme Court and the Indian Government both agree that upwards of 50, 000 people have been exposed to extremely poisonous chemicals in their drinking water for up to 22 years but till today there are no facilities for medical care of contamination affected people. Nor are there any facilities for the rehabilitation of the hundreds of children born disabled due to congenital anomalies.” said Safreen Khan of Children Against Dow Carbide.

Releasing a charter of demands of the Bhopal survivors organizations Satinath Sarangi of the Bhopal Group for Information and Action appealed to people all over the world to put pressure on Union Carbide and Dow Chemical and governments of USA and India to end the ongoing disasters in Bhopal.