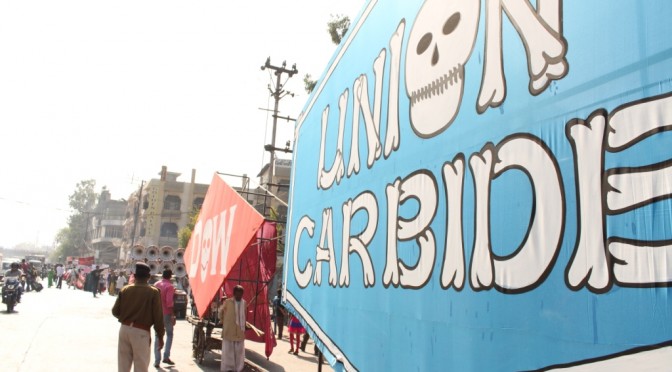 With the 32nd Anniversary of the World’s worst industrial disaster on December 3rd, five organisations of survivors of the Union Carbide disaster in Bhopal jointly addressed a Press Conference today. They said that the disaster is still ongoing and the generations born after the disaster are also marked by the poisons that leaked from the American multinational’s pesticide factory. The organisations said that the factory abandoned by the corporation is still killing and maiming people due to poisoning of groundwater from reckless dumping of toxic waste during its 14 years of operation prior to the disaster.

Said Rashida Bee, President of the Bhopal Gas Peedit Mahila Stationery Karmchari Sangh “US multinational, The Dow Chemical Company that took over Union Carbide in 2001 is responsible for cleaning up the contamination of soil and ground water in more than 50 square kilometres around the factory. In the last two years Dow Chemical has ignored four judicial notices asking its authorised representative to appear before the Bhopal district court. And now it is merging with another American multinational, DuPont, to further evade the civil, criminal and environmental liabilities of Bhopal.”

According to Balkrishna Namdeo, President of the Bhopal Gas Peedit Nirashrit Pensionbhogee Sangharsh Morcha, “The killer factory was set up and run in Bhopal with much help from the US government. And now the US government is sheltering both Dow Chemical and Union Carbide by refusing to serve the Bhopal Court’s notices to Dow. This year within one month, 127 thousand people wrote to the US President’s office asking that the Department of Justice serve the notice on Dow Chemical and all we got in response was an apology for deliberate inaction. That is why this year on the 32nd anniversary we will burn the US flag along with the logos of the two corporations.”

Nawab Khan of the Bhopal Gas Peedit Mahila Purush Sangharsh Morcha charged the Indian government with “active complicity in the ongoing corporate crimes in Bhopal”. He said that the Indian government was helping the US corporations get away without paying adequate compensation and cleaning up the environmental contamination. ” The central government is downplaying the figures of death and extent of injuries in the curative petition before the Supreme Court for additional compensation from the US corporations. It is also refusing to carry out a scientific assessment of the toxic contamination of soil and groundwater.” he said. According to him “the most glaring instance of the central government’s neglect of the victims of Bhopal is in the sorry state of the two institutions it runs — the Bhopal Memorial hospital and NIREH, the research centre that has not completed a single research project in last six years.

According to Rachna Dhingra of the Bhopal Group for Information and Action the Madhya Pradesh state government is “equally responsible for the continuing plight of the survivors and the utter neglect of their children’s health.” She said “In the last 12 years, the state government has not implemented a single recommendation of the Monitoring Committee set up by the Supreme Court to ensure adequate medical care and rehabilitation of the victims and their children.” Charging the state government officials with corruption, she said ” Since its inception, the dedicated government department of relief and rehabilitation of the Bhopal victims has been little else but a milch cow for the officials.  It is almost three years since we submitted documentary evidence of corruption in payment of 18 crores on economic rehabilitation by the department and have seen no action.” she said.

“The preliminary findings of the Sambhavna Trust’s recent research shows that 10 rimes more gas affected people are dying of cancers – primarily of the kidneys, throat and lungs – compared to unexposed people of similar socio – economic background. The bottomline is that half the victims of the disaster are Muslims and 80 % of the Hindus are from the low castes. That is the reason that even 32 years after that fateful night we have to continuing with fighting for our lives and that of the unborn.” said Safreen Khan of the Children Against Dow-Carbide”, an organization of the next generation of survivors.