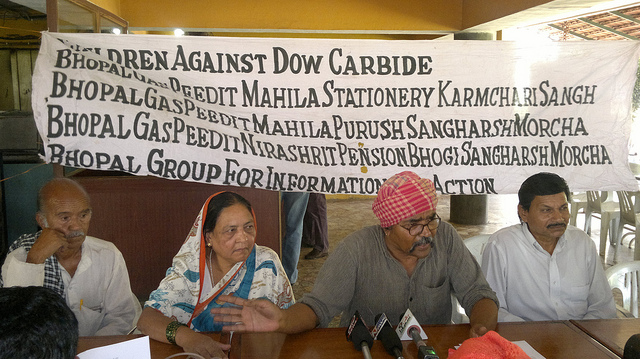 ICJB is led by five survivors’ organizations, which work on the ground in Bhopal. These survivors’ groups, along with supporters throughout the country, make up ICJB-India.

To contact ICJB-India and the survivors’ groups – email or call Rachna Dhingra, who speaks Hindi and English.

Satinath Sarangi, Bhopal Group for Information and Action (Also Managing Director, Sambhavna Clinic)Satinath, aka Sathyu, is a metallurgical engineer turned activist who arrived in Bhopal a day-after the disaster and stayed on to become a key figure in the struggle for justice in Bhopal. He is a founding trustee of the Sambhavna Clinic, a non-profit clinic dedicated to the holistic treatment of gas-affected persons in Bhopal. As the founder of the Bhopal Group for Information and Action, Sathyu has been involved with relief, research and publication activities towards the welfare of the survivors since the disaster.
Return to Top
Rachna Dhingra, Bhopal Group for Information and ActionRachna Dhingra, originally from Delhi, was just six years old when the world’s worst industrial disaster struck Bhopal in 1984. She was 18 when she moved to the US with her mother to attend the University of Michigan; it was there that she first became active in the Association for India’s Development. She developed an interest towards activist and women’s issues, keenly following the struggles in the Narmada valley and in Bhopal. In Ann Arbor, she and other AID volunteers began a campaign against Dow Chemical, and which later became the first chapter of the international group Students for Bhopal. After graduating with a business degree in 2000, Rachna joined a consulting firm where her first client, ironically, was Dow Chemical! After just a few months, she followed her passion and quit to join the peoples’ struggle in Bhopal. She describes this passion herself – “I truly believe in the power of ordinary people because they simply are capable of doing extraordinary things. I see it in Bhopal everyday and that is what keeps me going and inspired. As we say in Bhopal, Janta ki chala paltnaya Hill lai lai Jagjoor duniya.”