This past May, ICJB-NA Advisory Board Member Caitlyn Schuchhardt and a group of students and alumni from Concordia College in Moorhead, MN, geared up to protest outside of Dow Chemical’s annual shareholder meeting in Midland, Michigan. Students Shanna Krogh, Taylor Huwe, Katie Miller, and alumna Megan John joined Caitlyn on a 16-hour road trip to Midland, intent on urging Dow Chemical to accept responsibilities for the ongoing industrial disaster in Bhopal. 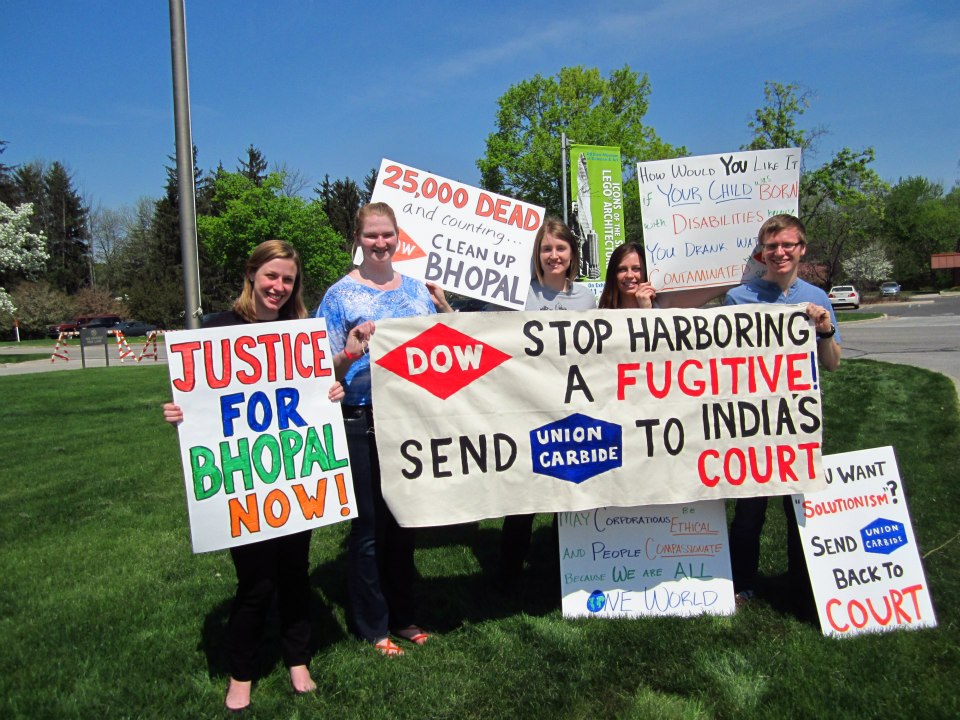 In addition to our presence outside of the meeting, we were able to pose two questions during the unaired Q&A period at the end of the shareholder meeting.  We posed these questions from the perspective of a Dow shareholder. Here are the questions we asked, followed by the response we received from Andrew Liveris, Dow Chemical’s current CEO.

Q. Our wholly-owned subsidiary, Union Carbide Corporation, is still considered an “absconder,” a fugitive, by the Indian Supreme Court.  Not only do they have charges remaining against us for negligence in the case of the gas leak, but they have outstanding liabilities stemming from the ongoing water contamination the factory has caused. As their parent company, we, Dow Chemical can ensure that Union Carbide returns to court to face their outstanding charges, but we have refused to do so, and thus we continue to harbor a fugitive.

In October of 2012, India’s High Court lifted a stay on summoning The Dow Chemical Company that had been in place since 2005.  Should we now be summoned to court and asked why we haven’t produced the fugitive Union Carbide, what would we say?  How will we explain our blatant disregard of the law? We have acknowledged various liabilities, particularly in Texas, why have we not addressed Bhopal properly?

As a shareholder, I want to know how we are recognizing and dealing with this matter, especially when the 30th anniversary of the Bhopal disaster is coming up, which has the ability to impact our stocks. How do we justify our behavior and continued denial of responsibility?

Liveris’ response (paraphrased for the most part, quotes are close to exact):

As Dow has stated in the past, “Dow did not own or operate Union Carbide at the time of the gas leak.” “Activists’ attempts to link us to Bhopal are misguided and misdirected.”  The Indian government owns the plant site and all cases regarding Union Carbide are closed.  “If you would like to do something about this, I suggest that you get on a plane and fly to India.” “Go speak with the Indian government, as this is their problem.”  “If I get asked this question again, I will not be responding.”  (NOTE:  this is almost word-for-word the exact same response Caitlyn received when she posed a different question to Liveris last year)

We are going to be sponsoring the Olympics through 2020, so this is an issue that will not be going away soon. In a 2012 article in the Motley Fool, two proposals were made for how we could end the Bhopal tragedy.  The first being that we make a dilutive stock offering to raise money which could be committed to a Bhopal Relief fund, and the second being that we sponsor an Olympic fundraising campaign.

This would not only help address the negative publicity we’ve received, but also show that we have decided to resolve an issue that has impacted our share prices ever since we acquired Union Carbide.

We bring up the Human Element a lot in our advertising, and yet our name is tainted.  People associate us with greenwashing, when what we could be doing is pursuing reasonable solutions such as these to end this ongoing tragedy. Why isn’t Dow considering options like this?

“The Olympics have been a resounding success for your company. We have benefited beyond our expectations from our Olympic sponsorship.  We are committed to a sustainable Olympics. Green infrastructure is here!  We are excited to be partnering with the Nature Conservancy to ensure our facilities in Russia are linked to nature. What we are doing with the Olympics is good for the people of the world and I’m not going to apologize for that.”

The Good: Midland residents came to shake our hands and thank us for being present. Some of them were familiar with Dow’s toxic legacy, leading back to Dow’s involvement in Vietnam with Agent Orange, and also the local contamination Dow has caused in Midland.  We received several “thumbs up” and waves from shareholders.  One shareholder who had a stockholder proposal on the meeting’s agenda included a shout-out to our group and the Bhopal disaster during his speech (which was seen on the livestream).  Residents and even the local security officers stopped to talk with us and learn more about our concerns.  We had great conversations with two shareholders who are also concerned about how Dow has been handling the Bhopal issue.

The Bad: We received some “thumbs down” and were told to go home. (As you can see, the good clearly outweighs the bad here!)

Check out the articles written up about the protest:

If you want to know more, please email us! We are already planning our action for next year,  which will be in May of 2014. This will be the year leading up to the 30th anniversary of the Bhopal disaster and we are looking to expand this action significantly. We have lots of ideas and are going to start planning early. We would love to have you on board, so please contact us if you have idea for actions or would like to join with us in bringing awareness to Dow’s toxic legacy.

We could not be more proud of how this action went!  If we were able to create this much of a buzz with only five people, imagine what next year could look like!