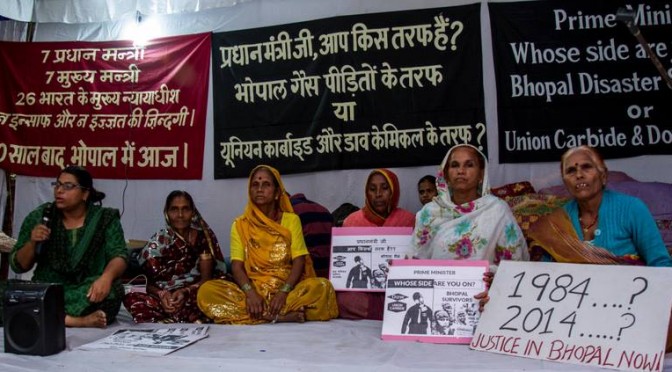 At a press conference today leaders of the five organisations of survivors of the Union Carbide disaster in Bhopal expressed hope that the Prime Minister will visit the disaster site and surrounding contaminated area and meet with the representatives of survivors’ organisations during his maiden visit to the city. Through an application to the Collector on September 4, the organisations have sought a 15 minute meeting with PM to discuss lingering issues of compensation, criminal justice and clean up.

Rashida Bee, president of Bhopal Gas Peedit Mahila Stationery Karmchari Sangh said, “From 1st August 2014 to 17th March 2015 we have sent 6 petitions to the Prime Minister and have acknowledgements on three and response to none. We urged the PM to provide ex gratia relief of Rs 1lakh to all those gas victims who were only paid Rs 25,000 as compensation. However all that happened was our petition was redirected to the Ministry of Chemicals & Fertilizers.”

“We have done our best to draw the attention of the Prime Minister to the burning issue of environmental contamination around the abandoned factory site. This toxic contamination is finding new victims every day in Bhopal but the Prime Minister has not taken a single step to make Dow Chemical clean up Bhopal”, said Balkrishna Namdeo of Bhopal Gas Peedit Nirashrit Pensionbhogee Sangharsh Morcha

Rachna Dhingra of Bhopal Group for Information and Action said that the worst disappointment they have faced with the present Prime Minister is with regard to the abysmal performance of the CBI which is directly under the PMO. “Under Modi’s charge the CBI has deliberately abandoned the bribery case against Dow Chemical’s Indian subsidiary, twice failed to make Dow Chemical appear in the criminal case and has not once argued the case for enhancement of punishment of Indian officials of Union Carbide.” she said.

“Despite this gloomy history we are hopeful that the Prime Minister will make an effort to know first hand about the current condition of the victims and the status of the contaminated factory site. We hope he will make an attempt to resolve the long pending issues of compensation, clean-up and punishment of killer Carbide.”, said Nawab Khan of Bhopal Gas Peedit Mahila Purush Sangharsh Morcha.

Safreen Khan of Children Against Dow-Carbide said that “If the Prime Minister’s does not visit the disaster area, does not meet the survivors it would be like a Hindu going to Varanasi and not visiting the Kashi Vishwanath Temple.”