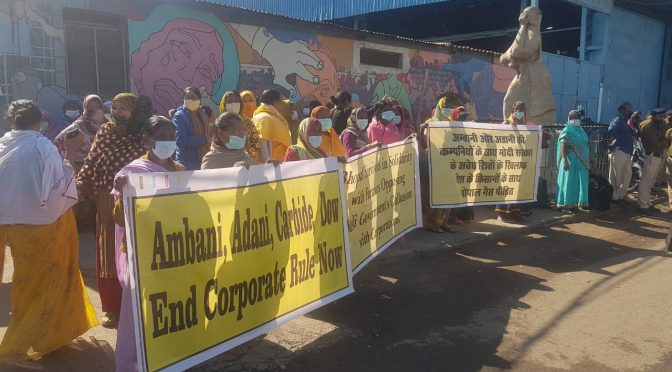 Four organizations of survivors of the Union Carbide disaster in Bhopal, today jointly held a demonstration in support of the ongoing agitation of the farmers. The organizations called for immediate scrapping of the recently passed farm laws that, they charged, were designed solely to help corporations maximize their profits.

“We extend our support to the farmers fighting against Modi government’s collusion with corporations, especially those run by Ambani and Adani. The Bhopal survivors continue to suffer misery and injustice due to the government’s collusion with Union Carbide and Dow Chemical. This unholy nexus between the government and corporations must be broken in the national interest.” said Rashida Bee, President of the Bhopal Gas Peedit Mahila Stationery Karmchari Sangh.

Drawing parallels with the situation in Bhopal , Nawab Khan, President of the Bhopal Gas Peedit Mahila Purush Sangharsh Morcha, said,”The black laws imposed on the farmers will affect every ordinary Indian, just as the lingering issues of the disaster are connected to the health and lives of  people all over the country. We appeal to peoples’ organizations all over the country to lend their active support to the ongoing farmers’ movement.”

“The Prime Minister’s deliberate inattention towards the suffering of the agitating farmers is quite akin to his stance  towards the survivors of Bhopal.” said Rachna Dhingra of the Bhopal Group for Information & Action. “The Bhopal survivors will join the farmers in banging thalis at the next Mann ki Baat on December 27” she said, referring to the Prime Minister’s monthly televised address to the nation.

Nausheen Khan of Children Against Dow Carbide said, “Together as a country, we need to create a National Noise to make the Prime Minister pay attention to the most urgent issues of the day. Lets start the big Noise at 11am on December 27.”