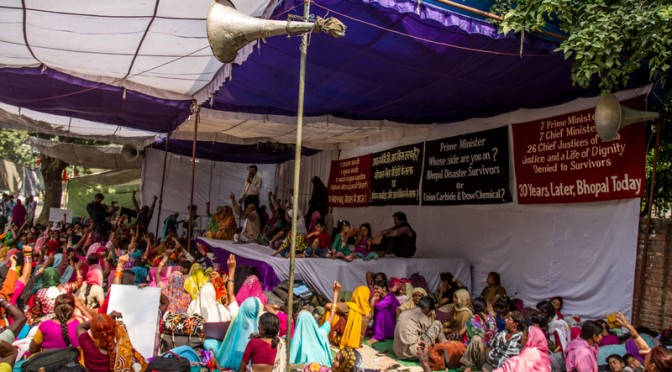 At a press conference today, leaders of five organizations fighting for the rights of the survivors of the Bhopal gas disaster condemned the deliberate delay by the state and central governments on the matter of additional compensation from Union Carbide and Dow Chemical.

Exactly one year ago the organisations had won their battle for revision of data on disaster related deaths and injury after a four-day waterless hunger strike by six Bhopali women. The fast was broken only after the Minister of Chemical & Fertilisers agreed to seek correct figures of disaster related injuries and death from concerned agencies.

As per the agreement with the organisations, figures of injuries were to be obtained from records of hospitals run by the state government. Additionally, the Indian Council of Medical Research was to provide scientific estimates of death figures on the basis of their research on Bhopal. It was understood that based on the figures provided by the state and central agencies, the Ministry would consider revising figures presented in the Curative Petition for additional compensation from the American corporations.

Rashida Bee, President of Bhopal Gas Peedit  Mahila Stationery Karmchari Sangh said “The State government took six months to send a reply to the letter from the Ministry of Chemicals and Fertilisers.[1][2][3] Almost a year has passed and it has still not provided the number of gas exposed people who visited the hospitals specially built for them in the years following the gas disaster.”

President of Bhopal Gas Peedit Nirashrit Pensionbhogee Sangharsh Morcha, Balkrishna Namdeo stated that documents obtained under the Right to Information Act show that the experts of Indian Council of Medical Research continue to dodge the question posed to them by the Ministry of Chemicals & Fertilisers.[4][5][6]

According to Nawab Khan of Bhopal Gas Peedit Mahila Purush Sangharsh Morcha, the ICMR experts headed by Dr Padam Singh are giving a bad name to their institution and to the science of epidemiology by failing to provide scientific figures of deaths due to gas exposure based on their long term research on over 80 thousand survivors.

Satinath Sarangi of the Bhopal Group for Information and Action said that the organisations will soon be moving the Delhi High Court against the ICMR experts who are denying the Bhopal survivors’ constitutional right to justice.

Said Safreen Khan of Children Against Dow-Carbide, “It is indeed a matter of national shame that the simplest of scientific questions on the Union Carbide disaster in Bhopal remain unanswered till today. And it is unacceptable that the survivors of Bhopal are being denied their right to fair compensation because of an incompetent bunch of scientists.”

Letter January 28, 2015 from Ministry of Chemicals and fertilizers

One thought on “Bhopal gas victims to move to Delhi High Court against Government of India for correction of death and injury figures.”