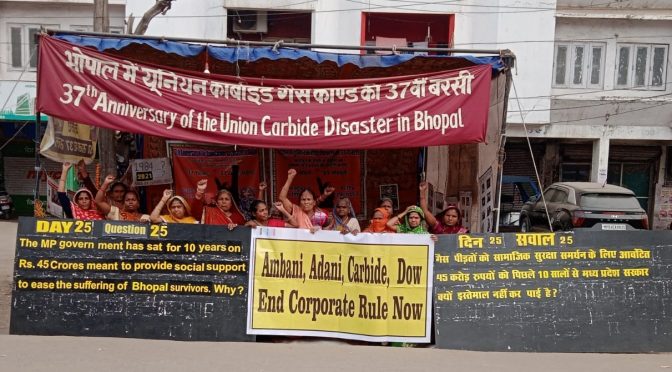 Organisations working among the survivors of the 84 Union Carbide disaster congratulated the agitating farmers on the Prime Minister’s announcement today to repeal the black agricultural laws. Rashida Bee of Bhopal Gas Peedit Mahila Stationary Karmchari Sangh said, “Modi government was imposing these black laws to benefit companies. This government talks about bringing Ram Raj but under its guise it wants to bring company Raj (rule) in the country. The farmers movement has given a big blow to the dream of Company Raj.

In protecting the interest of Dow Chemical, the Modi government in Bhopal has deprived the gas victims of justice and life of dignity. The victory of the farmers has given the gas victims the courage that the nexus between the government and corporations can indeed be broken, said Shehzadi Bee of Bhopal Gas Peedit Mahila Purush Sangarsh Morcha.

On the 25th day of their 37- day campaign, the survivors of Union Carbide Disaster today sought answers from the Madhya Pradesh government. They asked, “Why is the MP government sitting for 10 years on Rs.40 Crores ($5.5 million), meant to provide social support to ease the suffering of Bhopal survivors?” 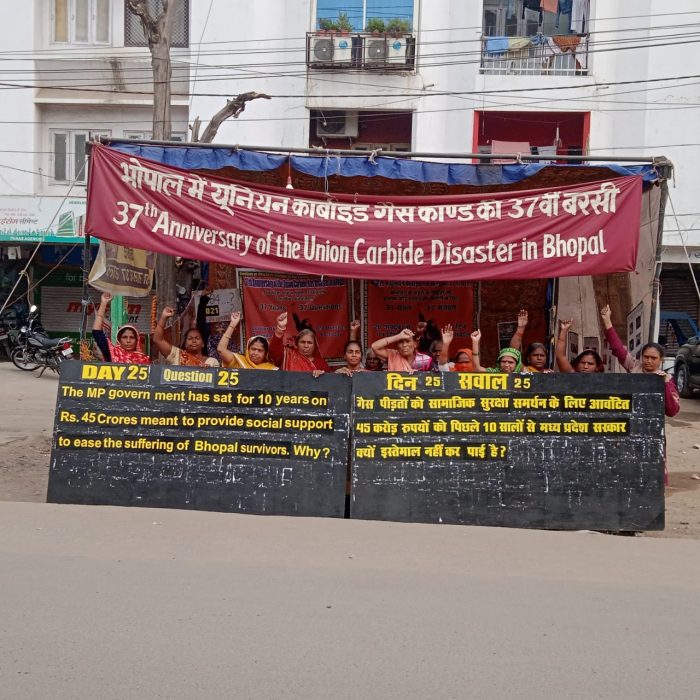 In 2010 The Group of Ministers (GoM) on Bhopal approved Rs 85.20Crores from the central government to the Department of Bhopal Gas Tragedy Relief & Rehabilitation, Government of Madhya Pradesh in order to provide social support to Bhopal gas victims. “Significant part of the expenditure on Social Rehabilitation is on those that are routinely incurred by other departments. Majority of these schemes have not provided any meaningful relief to the survivors. How can social support be provided by building public toilets or placing dustbins or for matter of fact by building 7 yoga centres where no Yoga therapy has ever taken place. The plan of building houses for those living in areas affected by groundwater contamination is still on paper”, said Nousheen Khan of Children Against Dow-Carbide.

“Even today there are thousands of gas exposed survivor who have lost their ability to work due to exposure induced physical and mental disabilities, several families where earning members have died as a result of the exposure induced illness and thousands of children born with congenital disabilities among the next generation of those exposed to toxic gases and contaminated ground water. They are the ones who need social support the most. Whereas the MP government has spent the most amount of social support amount in construction of useless buildings, said Rachna Dhingra of Bhopal Group for Information & Action.