At a press conference today leaders of four organizations working with survivors of the Union Carbide disaster called the state government’s move to build a memorial on the highly contaminated factory site, a “planned cover-up” of the crimes of Dow Chemical against the environment and people in Bhopal.

The leaders were joined by a former Union Carbide employee in calling upon the state government for a course correction with regard to the problem of hazardous waste left behind by Union Carbide currently owned by Dow.

Rashida Bee, President of the Bhopal Gas Peedit Mahila Stationery Karmchari Sangh said “Since 1990, 17 reports including those from the top research agencies of the central government have confirmed the presence of pesticides, heavy metals and poisonous chemicals in high concentrations till 3 kilometres away from the abandoned factory site. Instead of excavating and removing the thousands of tonnes of hazardous waste that is the cause for the ongoing contamination of Bhopal’s groundwater, the state government is planning to pour concrete over contaminated lands in the guise of a memorial to the disaster.”

Highlighting the urgency of responding to the ongoing spread of groundwater contamination TR Chouhan, a former plant operator at the Union Carbide factory in Bhopal stressed on the need for a comprehensive scientific assessment of the area in and around the factory. “Once we know what chemicals are present at what depths and distances, a plan for environmental remediation could be prepared. Without doubt much attention will need to be paid to thousands of tonnes of toxic sludge, buried outside the factory that is leaching poisons in to the soil and groundwater.”

“The state government’s grandstanding on the removal of 337 MT of hazardous waste from the factory has to be taken with more than a pinch of salt.” said Nawab Khan, President of the Bhopal Gas Peedit Mahila Purush Sangharsh Morcha. “ It’s a tiny fraction, less than 0.2 %, of the hazardous waste that is causing the ongoing second environmental disaster in Bhopal. It is being used as a smokescreen to hide the ugly reality of our poisoned city” he said.

Commenting on the findings of different scientific reports on soil and groundwater contamination in Bhopal, Rachna Dhingra of the Bhopal Group for Information & Action said that official agencies have reported high concentrations of six Persistent Organic Pollutants in the ground water, chemicals that retain their toxicity for over a hundred years. Greenpeace reported presence of mercury in soil in quantities several million times more compared to safe levels. The chemicals and heavy metals found by different agencies are known to damage the brain, liver, lungs and kidneys and known to cause cancers and diseases of the endocrine, reproductive, immune and other systems. “Over a hundred thousand people have been exposed to these poisons for 7 to 20 years and it is finding new victims every day as it spreads.” she said.

Said Nosheen Khan of Children against Dow Carbide, “Instead of seeking compensation from Dow Chemical for damages caused to the environment and people, the state government is using the memorial to the disaster and the transfer of a small amount of waste as smoke and mirrors to let the criminal corporation walk away from its legal obligation.” 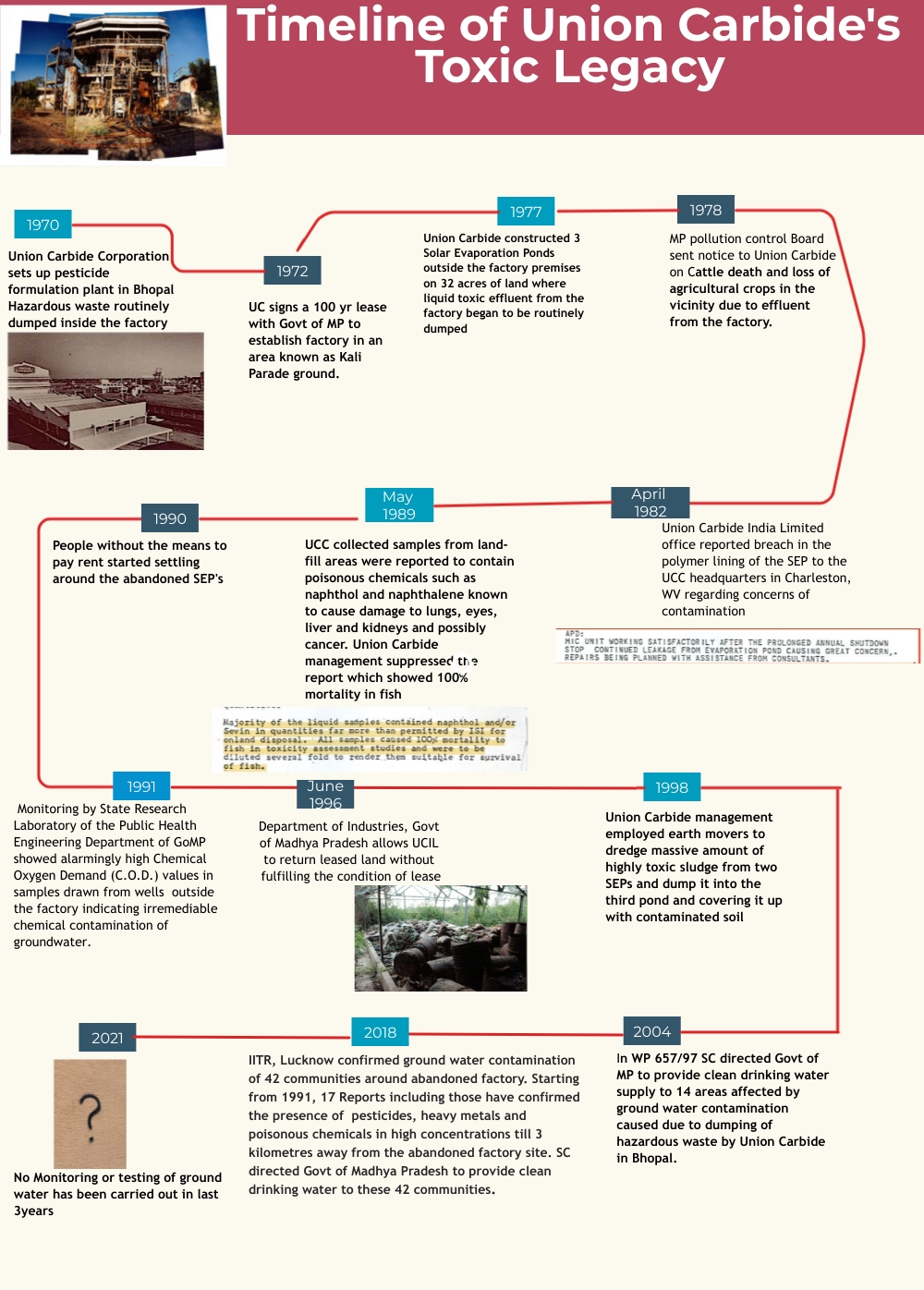 Health impacts of toxic chemicals in Bhopal (click to enlarge) 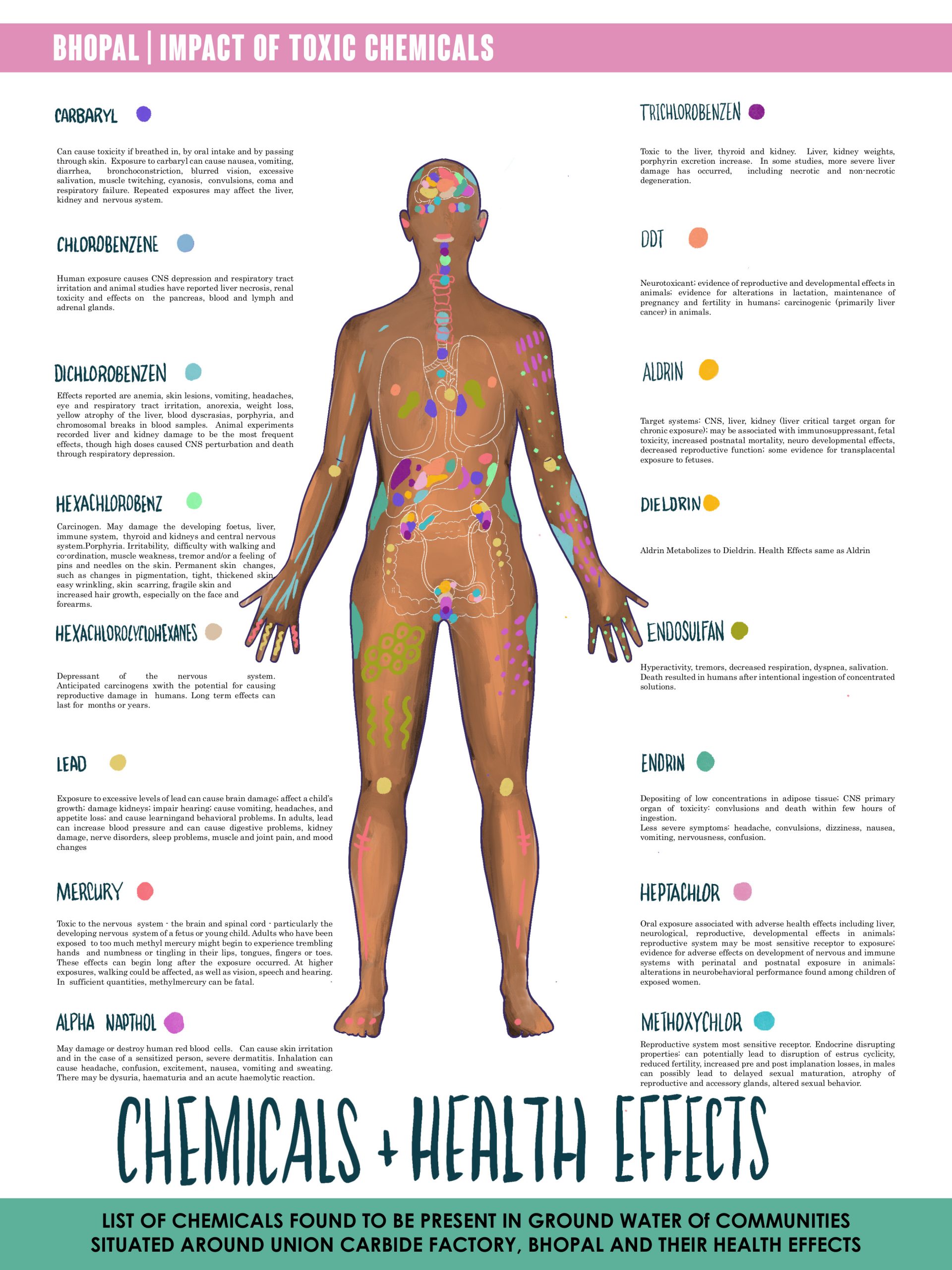