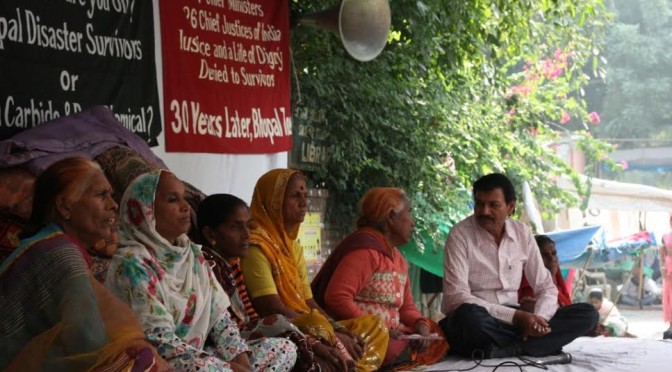 Five women survivors of the Union Carbide disaster in Bhopal fasting in New Delhi since yesterday stopped taking water at noon today. One thousand survivors of the disaster, mostly women, continued their dharna for the second day without a word from officials of the government.

The five women survivors, Premlata, Vishnu Bai, Kasturi Bai, Shehazadi Bee and Kamla Bai said that their decision to go on water-less fast from today had been conveyed to the Prime Minister and the Minister of Chemicals and Fertilizers on September 12, 2014.

US activist Bill McKibben, organizer of the recent Peoples Climate March, and M Ilango, Chairman of the National Fishworkers Forum a trade union of 3 lakh fishworkers along with five of his colleagues visited Jantar Mantar to express solidarity with the Bhopal protestors.

The five organizations said that they had started their agitation on the current demands with a dharna at Jantar Mantar on July 25, 2010, more than four years back.

The organizations are demanding additional compensation to all survivors of the disaster and revision of figures of disaster related death and injury in the Curative petition filed by the central government in the Supreme Court. They said that more survivors from Bhopal are expected to join the ongoing protest at Jantar Mantar tomorrow.