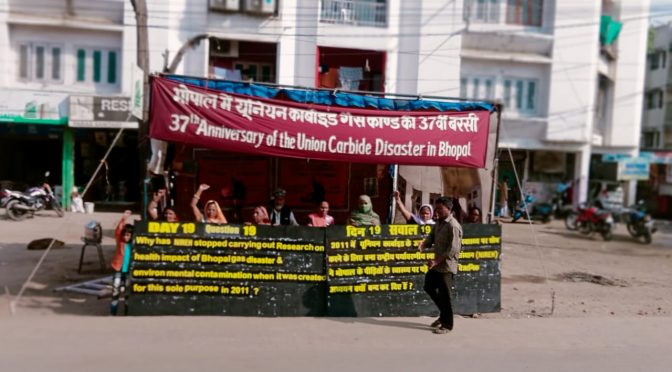 On the nineteenth day of their 37-day campaign, the survivors of the Union Carbide Disaster sought answers from the Government of India. They asked,” Why has the National Institute for Research in Environmental Health (NIREH) stopped carrying out research on the health impact of the Bhopal Gas Disaster & environmental contamination when it was created for this sole purpose in 2011?”

In 2010, the Group of Ministers of Bhopal had directed the setting up of the 31st centre of the Indian Council of Medical Research (ICMR) in Bhopal with the primary objective to carry out research that would benefit the survivors of the disaster who are still battling chronic illnesses. NIREH was established on 11th October 2010. “Despite passage of 10years this institute has not produced a single research paper that would help Bhopal gas victims”, said Rashida Bee, President of the Bhopal Gas Peedit Mahila Stationery Karmchari Sangh”

While it has not produced any meaningful research on health impact of Bhopal gas victims, ICMR, parent organisation of NIREH decided to not publish the results of a study that found birth defects in babies of gas exposed mothers to be 7 times higher compared to those non-exposed mothers. “While the findings of this study should have been used to substantiate the Curative Petition for additional compensation for the disaster it has been buried. This is just another example of ongoing collusion of the central government with Union Carbide and its owner Dow Chemical, said said Shezadi Bee, President of the Bhopal Gas Peedit Mahila Purush Sangharsh Morcha.

NIREH’s Scientific Advisory Committee in its 9th meeting held in September 2019 decided to shift focus of the Institute’s research activities from the Bhopal gas incident towards broader areas of environmental health. It is particularly disturbing that NIREH has chosen to study environmental health issues in different parts of the country, it completely ignores the deteriorating environmental situation in Bhopal caused by recklessly dumping hazardous waste by Union Carbide, said Rachna Dhingra of the Bhopal Group for Information & Action

Through the Campaign – “Bhopal Disaster : 37 years ; 37 questions” – the organizations wish to highlight urgent concerns regarding compensation, criminal justice, medical, economic and social rehabilitation and environmental remediation of polluted lands that need to be addressed to stop the on-going disaster.