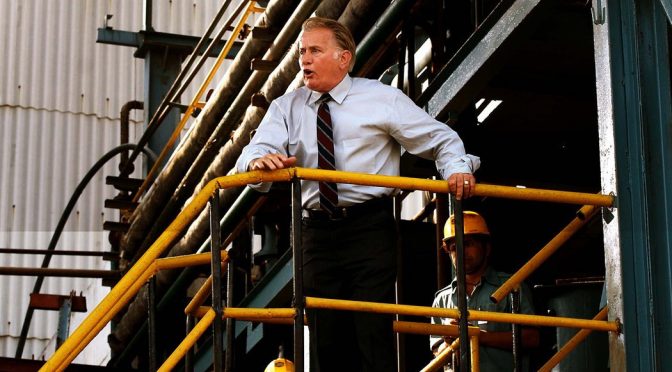 Wednesday, April 25, 2018, Chicago – Today, stockholders in DowDuPont cast their final votes on three shareholder resolutions[1] addressing the company’s continuing liability for the Bhopal chemical disaster. The resolutions describe increasing shareholder concern that management is mishandling the ongoing Bhopal controversy and call on DowDuPont to disclose the cost of this controversy upon the company’s reputation, finances, and its ability to invest in expanding Asian markets.

“The Bhopal disaster is far from over – its impacts spread across multiple generations. Through no fault of their own, thousands of extremely poor families are left to struggle with lifelong illnesses,” says Martin Sheen, who in 2014 starred in a movie based on events leading up to the original gas tragedy. “It beggars belief that even now, in 2018, DowDuPont managers continue to hide from their responsibilities as business leaders, and as human beings.”

The 1984 Union Carbide gas disaster in Bhopal – known colloquially as the Hiroshima of the chemical industry – has claimed 25,000 lives to date and injured over 500,000. “Survivors suffer chronic long-term illnesses that outstrip the most dire predictions,” says Satinath Sarangi, Managing trustee of the Sambhavna Clinic in Bhopal. “Recent studies find genetic damage is increasing[2], with incidences of cancer at ten times national rates within some groups[3]. Second and third generations are blighted by birth and developmental disorders[4].”

Dow Chemical – which completed a merger of equals with DuPont Nemours last year – inherited liability for Bhopal when it acquired Union Carbide in 2001[5]. It has since become a named party in civil, criminal and environmental actions in India.[6] “Dow Chemical senior executives purport to be committed to environmental sustainability yet they are ignoring the need for effective remedy of the Bhopal disaster,” remarked Austin Wilson of As You Sow, a non-profit shareholder advocacy organization, which filed a resolution requesting that executive pay be linked with sustainability. “A financial incentive for sustainability and corporate responsibility is necessary to ensure the company’s long-term success.”

Simon Billenness, President of CSR Strategy Group, says, “It’s clear that Dow’s disregard for the essential rights and dignity of Bhopal survivors has caused serious damage to its reputation, affecting growth prospects in India and beyond. Shareholders are therefore sending management a strong message that Bhopal can no longer be hidden away.”

India insists that a 1989 $470 million settlement with Union Carbide was based on death and injury figures “far removed from reality” and has filed a $1 billion civil case against Dow Chemical to cure what it terms a “gross miscarriage of justice”. Potential damages for criminal charges and for environmental contamination unrelated to the disaster remain pending. “Union Carbide is officially a ‘fugitive from justice’ for refusing to attend a manslaughter trial in India. Owner Dow Chemical has flouted at least five summons in the same criminal proceedings[7],” says Bhopal survivor Rashida Bi, a former winner of the prestigious Goldman Environmental Prize. “Dow publicises its help providing clean water to Flint, Michigan[8], even as it chooses to allow toxic wastes dumped around its factory to contaminate drinking wells in 42 of our communities[9]. For these reasons we will continue to prevent DowDuPont from making any substantial investment in India[10].”

“Despite a clear fiduciary duty, Dow and DuPont management failed to inform shareowners that the merged company would assume the legal and reputational legacy of the Bhopal chemical disaster,” says Bruce Herbert of Investor Voice, filer of a third Bhopal resolution on behalf of beneficial owners of common stock. “Though India’s economy grows between 7-9% each year, DowDuPont are effectively being excluded from investing there.”­­­

[1] The resolutions are listed from p.77 of the 2018 DowDuPont proxy statement: http://s21.q4cdn.com/813101928/files/doc_downloads/DowDuPont-2018-Proxy-Statement.pdf [2] A recent medical study found an increase in chromosomal aberrations within those exposed to gas over three decades: https://www.firstpost.com/tech/news-analysis/dna-damage-continues-in-methyl-isocyanate-exposed-bhopal-study-4246037.html [3] https://timesofindia.indiatimes.com/city/bhopal/Gas-hit-more-prone-to-cancer-says-study/articleshow/54002570.cms [4] A 2003 study published in the Journal of American Medical Association [JAMA] and carried out by the Sambhavna Trust Clinic showed growth retardation among children conceived by parents exposed to Union Carbide’s toxic gases: https://www.bhopal.net/tag/journal-of-the-american-medical-association/ [5] In a 2008 note, the Indian Law Ministry concluded that, “irrespective of the manner in which UCC has merged or has been acquired… if there is any legal liability, it would have to be borne by Dow…”: https://www.ndtv.com/india-news/bhopal-gas-tragedy-dow-liable-for-clean-up-says-law-ministry-420840 [6] A book by Amnesty International details the health and environmental impacts of the gas leak and ongoing contamination as well as related legal proceedings. See Chapter III of Injustice Incorporated: Corporate Abuses and the Human Right to Remedy (2014), Amnesty International Index: POL 30/001/2014, available at: www.amnesty.org/fr/library/info/POL30/001/2014/en (Injustice Incorporated). [7] On January 13 2017, an Indian court issued a fifth summons to Dow Chemical. The company has not yet made an appearance in the case: http://www.livelaw.in/magistrate-summons-dow-chemicals-bhopal-gas-disaster-criminal-case-email/ [8] Dow helps address the water crisis in Flint, Michigan: https://www.icis.com/resources/news/2016/03/24/9981964/dow-chemical-helps-in-us-flint-water-crisis/ [9] On March 8 2018, a division bench of Supreme Court judges asked the Bhopal Municipal Corporation (BMC) to arrange a safe, piped water supply to five further communities impacted by toxic contamination of the groundwater they use as their primary supply.

This brings the number of affected colonies acknowledged by the SC to 27 while the Bhopal Group for Information & Action (BGIA), a member of the monitoring committee appointed by the Supreme Court, states that 42 colonies are affected: https://timesofindia.indiatimes.com/city/bhopal/dumped-toxic-waste-from-defunct-carbide-plant-affects-20-more-areas/articleshow/63243525.cms

[10] A leaked State department cable reveals that Dow management have been unable to pursue a $5 billion investment programme in India due to Bhopal legacy issues: https://wikileaks.org/plusd/cables/09MUMBAI265_a.html