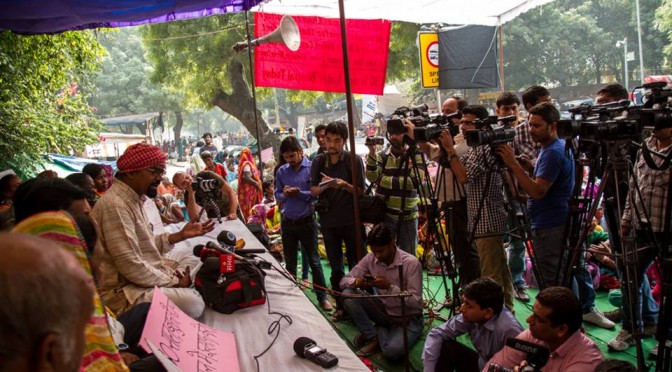 After 30 years of Bhopal Industrial Catastrophe:

Justice to the Victims of the Bhopal Gas Disaster.
Join hands with all Struggles to Ensure Responsibility of Corporations.

The night of 2 and 3 December 2014 will mark thirty years of the Bhopal gas tragedy, that killed, over 22,000 and exposed about 5,70,000 persons to damaging levels of the toxic gas, that resulted in serious health problems, including genetic mutation of thousands of unborn children. The abandoned factory site continues to threaten the health of the thousands living near. And those affected by the gas leak from the Union Carbide Corporation (UCC) Bhopal gas plant still await for justice. UCC was charged with culpable homicide for the disaster, but has never come to India to face these charges despite various court summons in the last 30 years. The Dow Chemical Company (DCC), which bought UCC in 2001, has consistently denied any responsibility for the Bhopal disaster. Even on 4 August 2014, a Bhopal court issued a third criminal summon to Dow ordering the company to appear before it on 12 November 2014 and explain why it has not produced UCC before the court – this too has been violated with impunity.

The Government of India (GoI) and the Government of Madhya Pradesh has unambiguously failed to enforce accountability of UCC and DCC, ensure rehabilitation and compensation of the victims and has over the thirty years overtly and covertly allowed UCC and DCC to evade the law. Government has even failed its responsibility to its citizens to ensure compensation to the victims as identified by its own agencies. Those compensated, only 33,672 persons of 5,69,081 affected as per official records, have also received a pittance of Rs 1 lakh. Those affected are demanding an immediate interim payment of Rs 1 lakh to all affected which would cost only Rs. 5,690 crores which is less than USD 1 billion.

There is no escaping the contrast between the US response to the British Petroleum oil spill on 20 April 2010 in the Gulf of Mexico that claimed 11 lives and its response to Bhopal. President Obama in his first address to the nation had thundered: “We will fight this spill with everything we have got for as long as it takes. We will make BP pay for the damage their company has caused.” To begin with the British-based global energy company was made to pay up to USD 20 billion for the oil spill while Warren Anderson, the American chief executive of UCC, arrested while in India, skipped bail, never to return and the company walked away with paying a measly USD 470 million settlement in 1988 which was all of 18% of the original compensation demanded. Even at today’s dollar value the compensation for the Bhopal gas disaster would only work out to at best about USD 950 million for the over half a million injured and affected and the 3787 officially acknowledged as killed by the gas leak. The 2013 Rana Plaza building collapse in Bangladesh which left 1129 workers dead and upwards of 2500 workers injured has only brought in a compensation of USD 40 million.

This is despite the fact that the compensation was adjudicated by the International Labour Organizations. Nothing can be starker than this to bring forth the inequality in the value of human life between the north and the south and there can be no stronger evidence of the unequal manner in which northern governments enforce corporate accountability in their own countries and in the global south.

The Bhopal gas tragedy should have served as a portentous warning to our government. And yet for the ‘ease of business’, including that of global corporations, the BJP Government is set on raising the ceiling for registration under the Factories Act by amending section 2(h), as the state of Rajasthan has already done, and allowing for self-certification, including on issues of workplace safety for establishments employing less than 40 workers. Furthermore, amendments to the Factories Act increasing the number of hours of permissible overtime are bound to create more industrial accidents.

We come together to join in solidarity will all organisations in their continuing struggle for justice and dignity and to hold Dow Chemical accountable and demanding that the Government of India:

1. Constitute a Special Commission on Bhopal that includes survivors’ representatives and which has the necessary funds and legal authority to address issues of Medical Care, Research, and Monitoring; Social and Economic Rehabilitation of the affected; Environmental Remediation; and Safe Drinking Water.

2. Undertake punitive action against Dow Chemical to ensure accountability, liability and responsibility for:

• Immediate payment of interim additional compensation according to international standards to all affected persons as per official records.

3. Pursue the Curative Petition before the Supreme Court with diligence in consonance with the justifiable demands for compensation made by the organizations of the affected people and ensure from its side that there are no further delays in brining the petition to its conclusion

4. Withdraw amendments to the numerical floor of the Factories Act along with amendments on overtime placed before the Lok Sabha

5. Move the Supreme Court for the repeal of related clauses in the Rajasthan Factories Act as being ultra vires of the constitution and

6. Amend the Companies Act to ensure that corporate culpability, including criminal liability, is adequately ensured to protect workers and citizens affected by industrial accidents and environmental damage