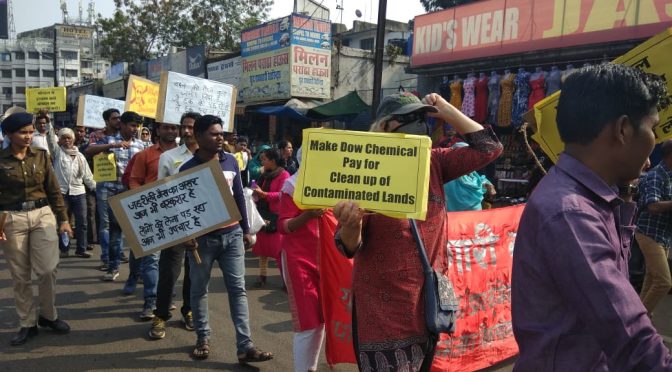 On the 35th  Anniversary of the world’s worst industrial disaster in Bhopal, leaders of four survivors’ organizations condemned successive governments at the centre and the state for colluding with the corporations responsible for the disaster and denying the survivors justice and a life of dignity for the last three and half decades. They jointly called upon the United Nations to provide urgent humanitarian and technical help to end the ongoing medical and environmental disaster in Bhopal.

“Today we happen to have two known supporters of Dow Chemical, owner of Union Carbide, ruling the central and state governments. During his 2015 visit to USA our Prime Minister instead of making any attempt to make Dow Chemical obey the Bhopal Court’s summons, hugged and dined with the corporation’s CEO. There has been a dramatic rise in sale of Dow Chemical’s products in India since Modi came to power. In 2006 our present Chief Minister who was then the Minister of Commerce and Industry, had written to the then Prime Minister to send “appropriate signal to Dow Chemical which is exploring investing substantially in India”. said Rashida Bee, President of the Bhopal Gas Peedit Mahila Stationery Karmchari Sangh.

Nawab Khan President, Bhopal Gas Peedit Mahila Purush Sangharsh Morcha said, “Both Central and State governments are misleading the Supreme Court by presenting false figures of death and disease caused by the disaster in the Curative Petition for enhanced compensation from the American corporations. Both are downplaying the hazards of the ongoing contamination of soil and groundwater which is the legal liability of Dow Chemical and refusing to get the contaminated lands scientifically assessed by competent agencies.”

“Our governments have been so busy cozying up to the criminal corporations that they have had no time left to care for the survivors of the disaster in the last 35 years. Till today there are no standardized treatment protocols for medical rehabilitation, no effective plans to provide gainful employment or monthly pensions to the needy and no initiative to ensure a safe living environment for the survivors of the disaster.” said Rachna Dhingra of the Bhopal Group for Information & Action.

Nousheen Khan of Children Against Dow Carbide said, ”Industrial pollution is today one of the top five causes of death worldwide and environmental diseases are growing at an alarming rate. The ongoing disaster in Bhopal is emblematic of an international situation that calls for an urgent response by international organizations such as the United Nations and in particular WHO and UNEP to provide technical and
humanitarian assistance to Bhopal survivors. With the failure of our democratically elected governments, it is time for the World to take notice of the ongoing disaster in Bhopal.”