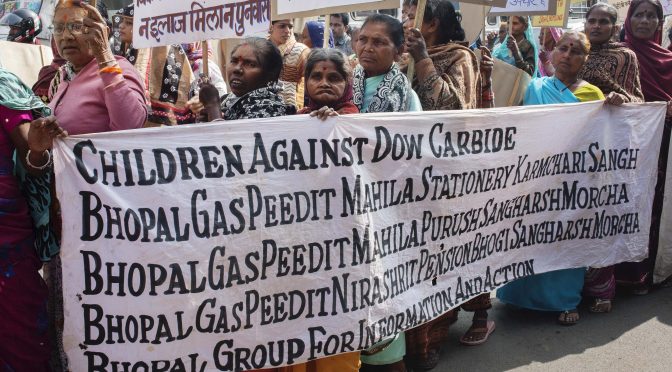 • A minimum of 8 thousand US dollars to each Bhopal survivor as additional compensation for personal injuries as claimed in the Supreme Court of India.

• Compensation for health damages including congenital malformations in children of gas exposed parents.

• Present hospital records and scientific reports before the Supreme Court of India to support the claim for enhanced compensation in the Curative Petition.

• Clain compensation for health damages including congenital malformations in children of gas exposed parents on the basis of hospital records and scientific studies.

• Stop absconding from justice and present itself in the criminal case on the gas disaster through its legal representative, John Macdonald.

The Dow Chemical Company must :

• Present itself in the Bhopal District court that has been summoning it for the last 7 years.

The US Government must :

• Ensure that its Department of Justice follows the provisions of Mutual Legal Assistance Treaty between USA and India and serves the summons issued by the Bhopal District Court upon Dow Chemical.

• Ensure the appearence of Union Carbide Corporation’s legal representative before the Bhopal District Court in the criminal case on the gas disaster.

• Ensure that the criminal proceeding against the Indian subsidiary of Union Carbide and its executives is speeded up and that it results in harsher punishment for the accused than accorded earlier in 2010.

• Stop Dow Chemical, USA from doing business in India till it obeys the directions of the Bhopal District Court in the criminal proceeding on the gas disaster.

• Provide unpublished findings of all studies on the effect of Methyl Isocyanate / Bhopal gas on living systems.

• Provide unpublished findings of investigations on contamination of soil and groundwater in and around the Bhopal factory.

• Ensure use of standard treatment protocols for safe and effective medical care of the Bhopal survivors.

• Bring the Bhopal Memorial Hospital & Research Centre under the Autonomous body governing the All India Institute of Medical Sciences, Bhopal.

• Ensure that the hospitals meant for medical care of people poisoned by Union Carbide follow the recommendations made by the Monitoring Committee set up by the Supreme Court of India.

• Establish a population based registry for all deaths, births and congenital malformations in the gas exposed families.

• Ensure that NIREH (National Institute for Research on Environmental Health) resumes research studies on the long term health damage caused by exposure to toxic gas and contaminated groundwater and the most effective means of ameliorating them.

The State government must:

• Ensure the immediate utilization of funds allocated for generation of jobs for the survivors of the disaster and their children.

• Pay monthly pension of Rs. 1000/- per month to 500 women widowed by the disaster who have been wrongfully denied their due.

• Accept the legal responsibility of cleaning up the area contaminated due to reckless dumping of hazardous waste by its current subsidiary, Union Carbide.

• Ensure that the land in and around the Bhopal factory are cleaned up according to international standards and returned in its “original condition” as stipulated in the lease agreement with the state government.

The Indian Government must:

• Claim compensation for environmental and health damages due to contamination of soil and groundwater in and around the abandoned Union Carbide factory site.

• Seek the assistance of the United Nations Environment Programme for comprehensive scientific assessment of the contamination of soil and groundwater in and around the abandoned Union Carbide factory site.

The State Government must:

• Stop attempts to cover up the ongoing contamination of soil and groundwater by building a memorial to the disaster at the factory site.

• Secure the factory premises and the area of the Solar evaporation Ponds to ensure that people in the surrounding areas are not exposed to contaminants in the soil.

Posts published related to demands of the survivors: