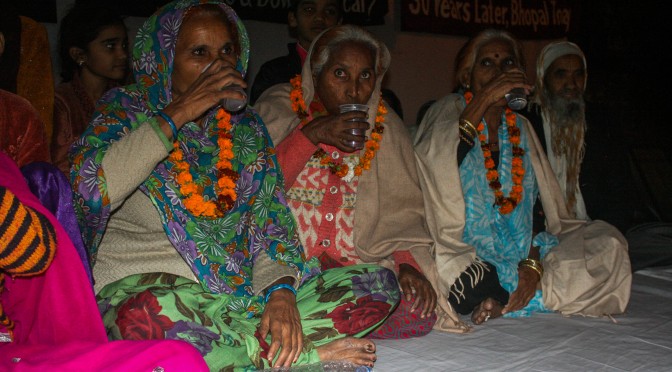 Along with the waterless fast and dharna, a mass fax action was conducted yesterday and today, directed at the PMO and the Ministry of Chemicals and Fertilizers. The faxes from supporters all over the world urged the Prime Minister and the Minsiter of Chemicals and Fertilizers to accept the two demands unequivocally. Two meetings were held, on the evenings of November 13 and 14, between the representatives of the protest and the Secretary of the Ministry.

The Minister Ananth Kumar joined the second meeting today and heard the demands carefully. He accepted the two demands and offered full assurance that the figures of death and extent of injury figures will be revised on the basis of data from hospital records and the scientific reports of the Indian Council of Medical Research. The Minister also assured that following the revision of figures, the curative petition will be amended and an application will be filed by the Central Government for urgent hearing. Responding to the demand for additional compensation for all survivors, the Minister assured that this too shall be done on the basis of the revised figures.

The representatives joined the protestors around 7:30pm today and delivered the message of the Minister and the Secretary to the survivors and others present at the protest site. The protestors democratically decided to accept the verbal assurances given by the Minister and urged the five women survivors, Premlata, Vishnu Bai, Kasturi Bai, Shehazadi Bee and Kamla Bai, and supporter Rachna, to break their fast. The Joint Secretary of the Department of Chemicals and Petrochemicals, AJV Prasad, visited the protest site and met with the survivors. He also urged that the fast be broken.

The survivors consider this a victory, and are celebrating the success of their efforts. Tomorrow, the survivors will take a much-needed break and tour the capital before departing for home.