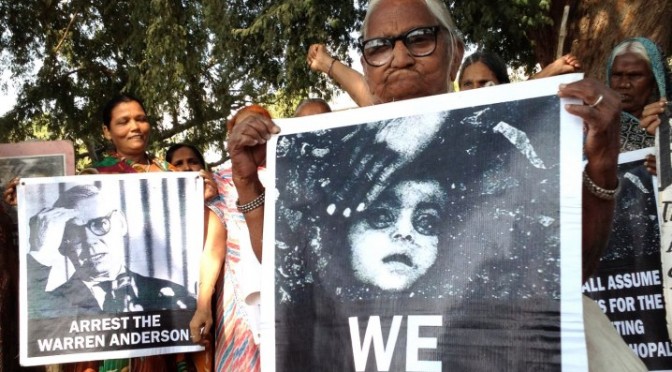 The organisations pointed out that Union Carbide, USA was charged with grave criminal offences including culpable homicide for the 1984 disaster but it is absconding from the Bhopal District court since 1992. Under these circumstances, the Chief Judicial Magistrate, Bhopal had summoned Dow Chemical that owns Union Carbide, USA to explain why it does not make its subsidiary face trial in the criminal case on the disaster.

According to the organizations, the Bhopal court’s notice was twice served on Dow Chemical through the US State and Justice Departments under the mutual legal assistance treaty. However, but the corporation that in the court’s view is harbouring the absconding Union Carbide has chosen to ignore the court’s notice.

The organizations said that the Indian government’s failure to make Dow Chemical honour the Bhopal court’s directions is particularly appalling since the American corporation does extensive business in India through its more than six subsidiaries. They said the government’s repeated failure holds ominous portend for the “Make in India “ campaign launched by the Prime Minister with much fanfare.

The organisations condemned the low priority accorded to the ongoing criminal cases on the world’s worst industrial disaster. They said that while the state government had promised day – to – day hearing, the case for enhancement of punishment of the Indian accused has not moved at all in the last 4 years. They also complained that recently the criminal case against Union Carbide USA has been transferred from the Chief Judicial Magistrate’s court to the court of a lower magistrate who has never dealt with such a matter.

The organisations also condemned the actions of Dow Chemical’s lawyer Sanjay Gupta in Bhopal, who obtains information on the case through bribing court officials. A member of the survivors’ organizations was physically attacked by Gupta yesterday when he objected to his clandestine activities in court.