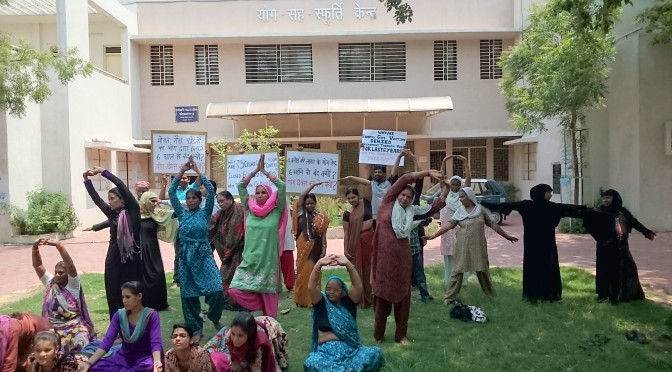 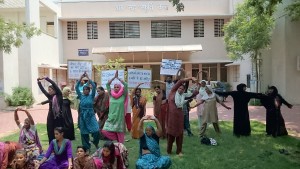 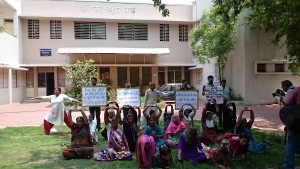 The survivors’ action was led by five local organizations that have long been fighting for proper treatment of chronically ill survivors. Aware of the ill effects of taking symptomatic medicines, the organizations have been campaigning for introduction of Yoga therapy at the six gas- relief hospitals that are meant to serve the over half million people exposed to poisonous gases in December 1984.

“To start with, in February 2007, we had to sit on a 19 day fast to convince the government to start Yoga therapy in the hospitals meant for gas victims. Eventually it was only started in 2 hospitals and only for part of the time”, says Rashida Bee of Bhopal Gas Peedit Mahila Stationery Karmachari Sangh.

According to Mr. Balkrishna Namdeo of Bhopal Gas Peedit Nirashrit Pensionbhogi Sangharsh Morcha, in a little over two years more than 2000 gas patients reported relief through Yoga therapy for problems such as breathlessness, joint pains, back ache, menstrual irregularities, insomnia and others chronic ailments without taking steroids, painkillers and psychotropic medicines.   Despite this, he said, in 2009 the BJP government arbitrarily closed down Yoga treatment in gas-relief hospitals.

The Bhopal Gas Peedit Mahila Purush Sangharsh Morcha’s President Nawab Khan said that they had obtained documents under RTI that show that the decision to stop Yoga therapy in the hospitals was based on opinions of medical superintendents that demonstrate the ignorance of medical facts and utter indifference towards the treatment of chronically ill survivors. “All the Superintendents made the same ridiculous claims that medicines did not have any side effects and Yoga had no health benefit for gas victims.”, he said

“More recently, the State Government’s indifference towards Yoga is evident in the abandoning of 6 out of 7 yoga centers since they were built to promote Yoga among the survivors of the disaster. These centers built at a cost of about Rs 4 Crores have been lying unused for last 6 months. One is even being rented out as a venue for wedding parties.”, said Safreen Khan of Children Against Dow-Carbide.

Satinath Sarangi of the Bhopal Group for Information & Action said “Most of the state government’s hullabaloo on Yoga is but a charade. Its officials and ministers are too busy earning commissions on purchase of medicines and building of Yoga centers to be actually using Yoga to benefit the victims of the world’s worst industrial disaster still awaiting proper medical treatment.”