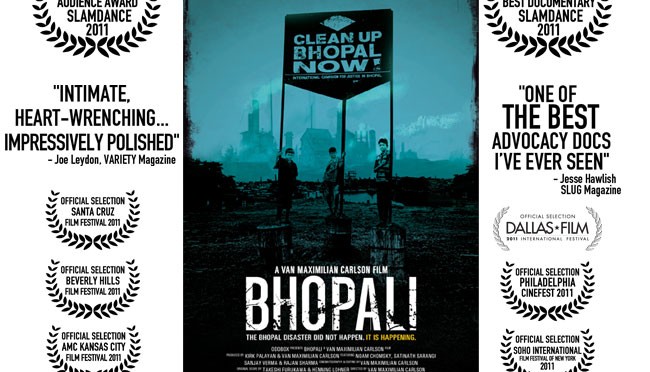 If you cannot find a copy of a specific film, please contact us and we may be able to help.

“From producer Deepak Nayer (Buena Vista Social Club, Lost Highway) comes this powerful drama about a newlywed couple whose lives are changed during the lethal gas tragedy in Bhopal, India in 1984.” – IMDB

Bhopali is an award-winning, feature-length documentary that details the experience of second Bhopal gas disaster and the subsequent contamination of groundwater by Union Carbide Corporation. It follows several children as they and their families cope with the ongoing disaster. Set against the backdrop of vehement protests for the 25th anniversary of the disaster, the Bhopalis continue to fight for justice, proving to be anything but victims.

Through the testimony of key witnesses, this documentary reveals the events as they unfolded and how Union Carbide responded to the crisis.

“Twenty Years Without Justice” explores the disaster’s causes, consequences and the campaign for justice. The film includes interviews with survivors, the lawyer behind the historic US lawsuit against Carbide, and a former engineer from the now-abandoned factory.

An excellent documentary and campaign video, ideal for classroom presentations, conferences, and other educational events!

“This powerful film explores how Union Carbide successfully manipulated both the US and the Indian legal systems against each other, to avoid having to defend its record in the Bhopal plant in court. Featuring, a young Indian-American lawyer, the film follows the case he brought on behalf of the victims in front of the Federal District Court in New York. Constructed as Sharma’s case would be presented to a jury, the film presents the compelling evidence assembled against Union Carbide, including never-before-seen documents, exclusive interviews with former Union Carbide officers, powerful archival material, and scenes filmed in and out of the abandoned plant. As the story unfolds, the film makes it clear the real culprit is the lack of any international law or tribunal to govern the activities of multinational corporations.” – Official Film Description

A Healing Garden Grows in Bhopal, by Healthcare Without Harm (10:21)

Films by the Yes Men. Trailers Available Via YouTube.

Documentaries by the infamous corporate pranksters, the Yes Men. Featuring their infamous Bhopal prank, and a visit to Bhopal to meet with the survivors/activists that lead the International Campaign for Justice in Bhopal.

By Himali Kapil and Umang Bhattacharya.

A short film, produced around the 15th anniversary of the Bhopal Disaster, describing the spate of birth defects in those born to disaster survivors and the survivors fight for justice.

Greek documentary that explores how the Union Carbide chemical disaster of 1984 continues to affect people today. Passionate feelings of indignation, not least from the pic’s experienced documaker Stavros Stagos, shine through. Won a prize at the Thessaloniki Documentary Film Festival.

Witnesses in the pic’s first half report how a trail of negligence and mismanagement led to the deadly gas leak. The rest details how Bhopal’s current residents are still being poisoned by contamination never properly cleaned up, and how the U.S. and Indian governments have colluded in the coverup. Subversive use of archival footage, such as old commercials for Union Carbide products, adds zing to an adequate tech package. – VARIETY

Part I includes rare footage of Bhopal in the hours and days after the disaster.

“Chemical Valley begins with Bhopal and the immediate response in the Kanawha Valley, an area once dubbed by residents “the chemical capital of the world” because of the many plants operated by such industrial giants as Monsanto, DuPont, FMC, and Union Carbide. The program then follows events in the valley over the next five years as lines are drawn and all sides heard in the debate between those who fear for their livelihood and those who fear for their lives. Chemical Valley explores issues of job blackmail, racism, and citizens’ right to know and to act as it documents one community’s struggle to make accountable an industry that has all too often forced communities to choose between safety and jobs.” – Official Video Description

Has Union Carbide Ever Been Found Accountable For Bhopal? (2003)

Also known as “Hunting the Corporate Killers” by Amos Cohen

BBC News Coverage of the Disaster

Video uses the actual voice-over from a Dow Chemical commercial, from their Human Element advertising campaign. But the original visuals have been replaced with pictures from the Bhopal disaster and Dow’s other misdeeds, illustrating the utter hypocrisy and cruelty of Dow.