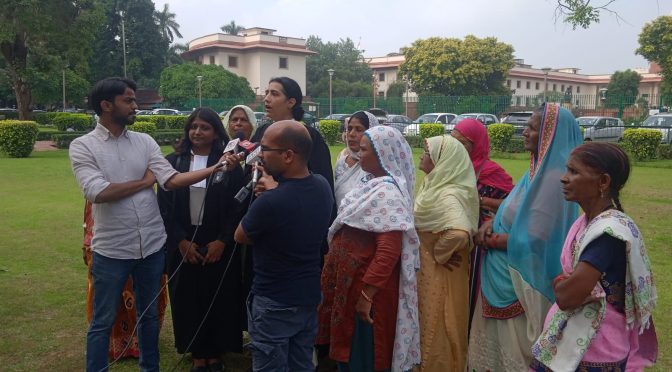 Leaders of five organizations of survivors of the Union Carbide gas disaster in Bhopal expressed satisfaction at the Indian government’s commitment to pursue the Curative Petition for additional compensation in the Supreme Court at today’s hearing. They expressed hope that while the Court has limited the participation of organizations in the Curative Petition, the government will pay due regard to the claims of the Bhopal victims for enhanced compensation, as they are required to do by statute, as per extent of injuries suffered and deaths caused by the disaster.

“It is indeed heartening that the Attorney General assured the five-judge bench that he will be ready with facts and arguments to argue the case for enhanced compensation at the next hearing on January 10.” said Rashida Bee, president of the Bhopal Gas Peedit Mahila Stationery Karmchari Sangh.

Said Rachna Dhingra of the Bhopal Group for Information & Action, “As our lawyer, Ms. Karuna Nundy, pointed out at today’s hearing, Union Carbide committed a fraud upon the Court while getting the settlement of 470 million dollars approved in 1989. The corporation suppressed internal documents that showed that exposure to the leaked gas was known to cause permanent damages, and got the government to agree to a paltry settlement. Carbide is also a proclaimed absconder from India’s criminal courts. We hope the government will expose Union Carbide’s fraud by presenting actual figures of death and injuries caused by the disaster at the next hearing on January 10.”

“The government is just claiming a refund of the moneys it has spent in compensating Bhopal victims. This will not benefit the survivors. Unless the figures of death and the extent of injury are corrected immediately, the Curative Petition will heap more injustice on the Bhopal survivors,” said Nawab Khan of the Bhopal Gas Peedit Mahila Purush Sangharsh Morcha.

“We respectfully insist that the court will make good on its promise today to hear us, and that the government will work closely with us to present the truth before it.” Balkrishna Namdeo of Bhopal Gas Peedit Nisrashrit Pension Bhogee Sangharsh Morcha said.

“The Supreme Court said today that our representations would now be heard at the court’s discretion. Respectfully, we do not believe that this obliges the court to give our arguments due regard,” Rashida Bee added, “but we will proceed on the understanding that they will do so.”

Nousheen Khan of Children Against Dow-Carbide, said “Every day we see the health damage done to an entire generation born after the disaster, and we hope the government will recognise our damaged children to be victims of this criminal corporation when they present their claims at the next hearing.”