The first Students for Bhopal conference was a blast! More than 30 SfB members attended from as far away as India, and more than 12 schools were represented overall. From start to finish, the conference was one big PARTY!

Well, not exactly, but we did have a lot of fun. Held at the University of Cincinnati campus and graciously hosted by AID-Cincinnati from Sept. 3-4, 2005, the conference brought together students to learn about Bhopal and plan for the year ahead. In 17 sessions spread over two days (September 3-4, 2005) the conference covered topics ranging from updates on the campaign and lawsuits against Dow-Carbide to workshops on organizing, media and outreach.

“Students for Bhopal”
Ryan Bodanyi, the Coordinator of Students for Bhopal, discussed the state of the student movement for justice – and drew lessons from the previous student movement against Dow which forced the company to stop the production of Napalm. Today, Dow is again vulnerable to student protest: its connections with schools across the country include recruiting, research, massive contributions and college investments in the company totaling at least $110 million.

“Bhopal Campaign”
Rachna Dhingra, the India Coordinator for ICJB, brought us up to date on the very latest news from Bhopal – but not before we surprised her with us all singing “Happy Birthday!”

“Shared Experience”
John Mathias moderated an interactive session in which attendees shared their own experiences of organizing for Bhopal. The session featured a report from Akhil Katyal, representing “We for Bhopal” 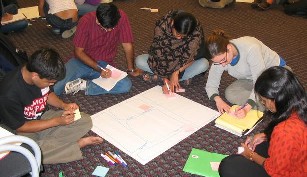 at Delhi University in India, about their meeting with the President of India; their fact-finding trip to Bhopal last year; and the report and film which they produced, documenting their experiences.

“Vision for SfB”
In this session, facilitated by Aquene Freechild, we dreamed about what SfB might look like in two years – and what we might accomplish. A few nuggets:

• 12 New England colleges divest from DOW, Wheaton College leads the way.
• Local story – Wheaton college students convince President Crutcher to sign pledge to not have any affiliation with Dow. No investments, contributions or buying of Dow products because of Bhopal.
• “I thought I could run and hide but I guess college students do more than skip classes and guzzle beer. Who’d have guessed?” – Warren Anderson, from Indian Jail.
• Dow executives have fled the country for Antarctica, the only place they are safe.
• Bhopal advocates march on White House and Indian Embassy in simultaneous giant protests
• Indian embassy hangs sign outside: “Sorry about being big jerks re: Bhopal”

The conference was also a great opportunity for SfB members to have fun together and get to know each other. Friends were made, meals were shared (the food at the conference was absolutely delicious) and laughter was almost everywhere (most of it inspired by DC, Adriane, or Somnath). Saturday night featured a walk along the Kentucky side of the Ohio River, organized by Sandesh (who also served as an impromptu tour guide). The night included a stroll across the purple bridge, led by the infamous “cool Wheaton” gang, who delighted the crowd by leading with a jig.

None of it would have been possible without the tremendous support from AID-Cincinnati, our conference hosts. They did an outstanding job arranging for meals, facilities, and accommodations, and we all owe them a huge debt of gratitude for all their hard work!

We’re already planning for next year’s conference, also planned for Labor Day weekend. So save the date!