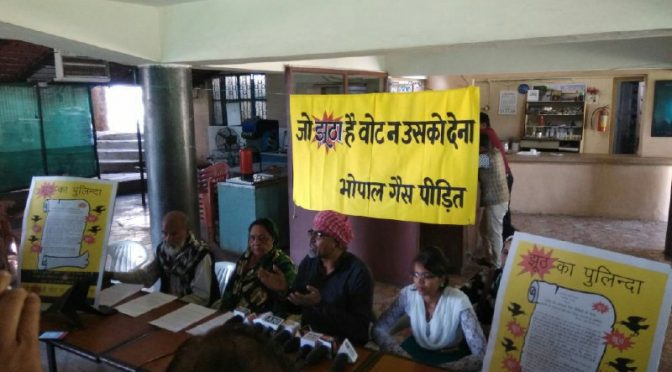 At a press conference today, leaders of five organizations of the survivors of the Union Carbide gas disaster in Bhopal, announced their plans of campaigning against the BJP in the by-polls at Mungawali and Kolaras later this month.

The leaders said that they will be focusing on the false promises made by BJP leaders on the issue of compensation to the Bhopal gas victims in their voter education programme in the impending by-polls. They plan to share copies of official documents with the electorate in the two areas to substantiate their allegations of betrayal by BJP politicians. 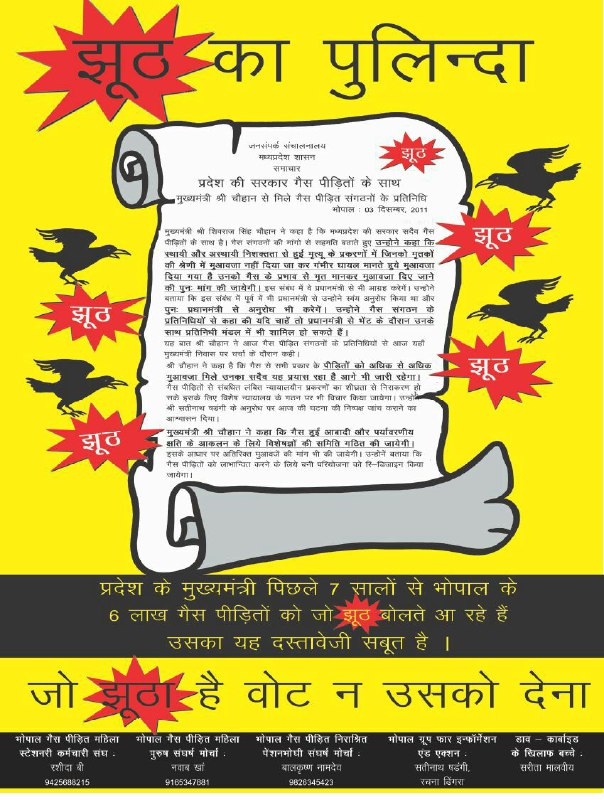 “The by-elections will be our first step in making long pending issues of the gas disaster part of the state and national elections this year and the next. At Mungawali and Kolaras we hope to provide the critical edge to ensure the defeat of BJP on both the seats.” said Rashida Bee, President of the Bhopal Gas Peedit Mahila Stationery Karmchari Sangh.

Talking about their strategy for the campaign, Balkrishna Namdeo of the Bhopal Gas Peedit Nirashrit Pensionbhogee Sangharsh Morcha said, “Most of BJP’s campaign in the by-election rests on promises made by the Chief Minister. Our strategy is to just present facts on the Chief Minister’s betrayal of the seven year old promises on compensation to the six lakhs victims of the disaster.”

“The power of our campaign rests on official records of written promises on compensation to gas victims. Everything we tell the voters at Mungawali and Kolaras will be based on official documents that will speak for themselves.” said Nawab Khan of the Bhopal Gas Peedit Nirashrit Pensionbhogee Sangharsh Morcha.

Satinath Sarangi of the Bhopal Group for Information and Action said that the Bhopal survivors’ organizations will not be aligning themselves with any political party and will be depending on public support for their campaign resources.

“There’s a popular saying ‘those who tell lies get bitten by crows’, the Bhopalis will now be the crows biting the lying politicians at Mungawali and Kolaras and everywhere else.” said Sarita Malaviya of Children Against Dow Carbide.