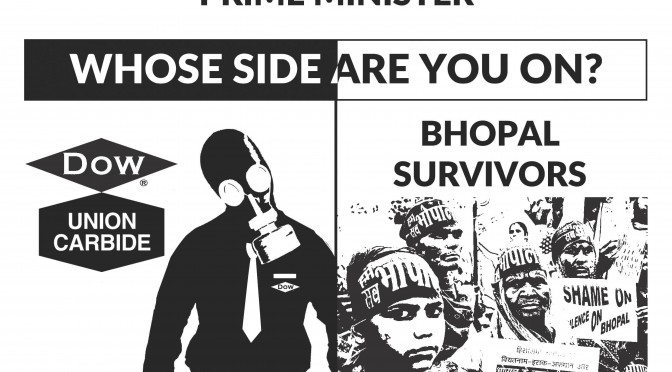 On the occasion of the 31st Anniversary of the Union Carbide disaster in Bhopal, leaders of five organisations jointly fighting for the rights of the survivors, today condemned the Modi government for its failure in resolving the lingering issues of the disaster. They said that the amendments proposed in Environmental and Labour laws by the Modi government would increase the possibility of the recurrence of Bhopal disaster in the country.

President of the Bhopal Gas Peedit Mahila Stationery Karmchari Sangh, Rashida Bee said that the central government has failed to take action against the American corporations that are defying the orders of the Indian courts.”The Bhopal Chief Judicial Magistrate has thrice sent notices for appearance to Dow Chemical but the Indian government has failed to make it appear in court.” she said.

The organisations said that CBI under Modi has deliberately discharged Dow Chemical’s Indian subsidiary from the criminal case of bribery. “The CBI has been always lax towards these corporations but they have never been as lax as they have been under Modijee.” said Balkrishna Namdeo of Bhopal Gas Peedit Nirashrit Pensionbhogee Sangharsh Morcha.

Nawab Khan of Bhopal Gas Peedit Mahila Purush Sangharsh Morcha was particularly angry at the Modi government’s failure to make use of UNEP’s offer to carry out a comprehensive scientific assessment of the ongoing toxic contamination in and around the abandoned Union Carbide factory in Bhopal. “Assessment is the first and the most important step towards clean up in Bhopal but for reasons that he hasn’t cared to explain, the Environment Minister would not accept UNEP’s unprecedented offer.” he said.

“The Prime Minister talks about cleaning every corner of the country but his Swachhata Abhiyaan does not concern itself with the thousands of tonnes of poisonous waste buried in and around the Bhopal factory.” said Safreen Khan of Children against Dow – Carbide.

The organisations were apprehensive of the amendments in laws proposed by the government in laws, that they said would prepare the ground for more Bhopals around the country. “By proposing self certification by corporations under Environmental and Labour laws, the government will be encouraging them to commit Bhopal like crimes all over the country.” said Satinath Sarangi of Bhopal Group for Information & Action.