Four organizations of survivors of the Bhopal gas disaster demanded that Union Carbide and its owner Dow Chemical pay additional compensation for the long term injuries caused to the gas exposed people as evidenced in the ongoing COVID 19 Pandemic. The organizations presented official records which showed that COVID-19 death rate in the gas exposed population is 6.5 times more that of the non gas exposed population of the Bhopal district.

“The Pandemic has exposed the official lie that 93% of those exposed to Union Carbide’s poisonous gases had only temporary injuries. “ said Rashida Bee, President of the Bhopal Gas Peedit Mahila Stationery Karmchari Sangh. “We have official records that show that the gas exposed population, that is 17% of the district’s population of 2.8 million, has contributed to 56% of the COVID-19 deaths in the district so far. 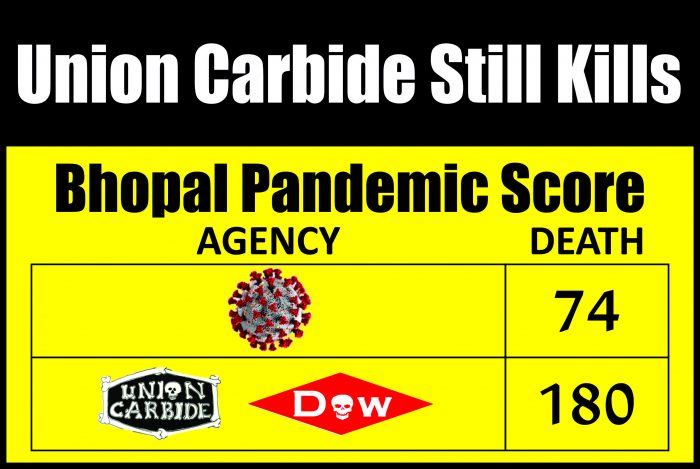 (Calculations for excess deaths and mortality rates available as PDF)

“It is time the Indian government presented these and other hospital records before the Supreme Court that is yet to hear the Curative Petition for additional compensation for damage caused by the December 1984 disaster” said Nawab Khan, President of the Bhopal Gas Peedit Mahila Purush Sangharsh Morcha.

Rachna Dhingra of the Bhopal Group for Information & Action said that Union Carbide’s own documents state that the injuries caused by exposure to Methyl Isocyanate are permanent in nature yet more than 90% of the exposed people have been paid only 500 US dollars compensation for temporary injuries “It is a pity that it took a global Pandemic to highlight the injustice meted to the victims of the world’s worst industrial disaster.” she said.

“Dow Chemical has used the Pandemic to cut thousands of jobs and make more profit by producing hand sanitizers, but it looks the other way when the Pandemic exposes the lasting damage its subsidiary caused in Bhopal. Dow Chemical continues to evade the pending civil, criminal and environmental liabilities of Union Carbide in Bhopal.” Said Nausheen Khan of Children Against Dow Carbide.