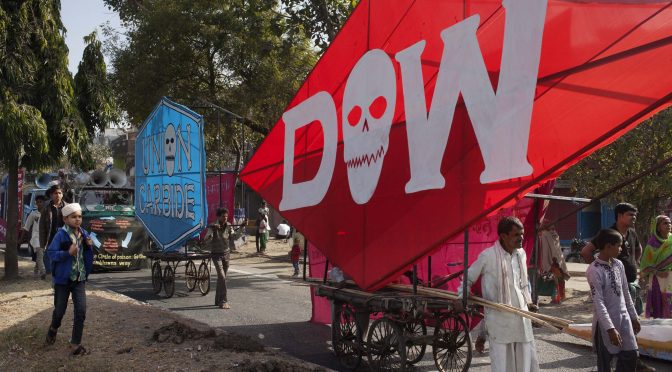 At a press conference today, leaders of organisations of survivors of the 1984 Union Carbide gas disaster in Bhopal expressed distress at the apathy of the state and central governments towards the imminent possibility of the US Corporation escaping criminal liability for the disaster forever.

The organisations said that Dow Chemical, the owner of Union Carbide, after merging with another American multinational DuPont has announced plans to split up in to three entities by June 2019. According to them, Union Carbide that is absconding from grave criminal charges, including culpable homicide, for the last 26 years will, as per criminal law, cease to be criminally liable following the trifurcation.

The organisations said that more than a month back they had written to the Prime Minister and the Ministries of Chemicals and Fertilisers, Law and Justice and External Affairs as well as the Central Bureau of Investigation in the central government and to the Ministry of Bhopal Gas Tragedy Relief & Rehabilitation in the state government asking for specific steps to be taken to stop the American multinational’s imminent escape from criminal proceedings on the disaster. [1] They said they have not received a single acknowledgement till date, let alone a considered reply.

“We are very worried that just as the Congress government let Anderson escape the arms of law, the inaction on this matter could well be part of a plan by the BJP governments at the state and the centre to allow the killer corporation to escape Indian courts. After all the BJP is the major beneficiary of corporate donations.” said Rashida Bee of the Bhopal Gas Peedit Mahila Stationery Karmchari Sangh.

Said Nawab Khan, President of Bhopal Gas Peedit Mahila Purush Sangharsh Morcha, “The Prime Minister has the CBI directly under him and we requested that he instruct CBI to obtain a prohibitive writ to prevent the breakdown of Union Carbide, USA. Without even an acknowledgement, we are not sure that the CBI is even aware of Union Carbide’s imminent escape.”

“We have sought the Prime Minister’s intervention in enlisting the support of US agencies to ensure that Union Carbide and Dow Chemical abide by the orders of Indian courts. He is fully empowered by the Mutual Legal Assistance Treaty between the two countries to do this but so far he has chosen not to use these powers.” said Rachna Dhingra of the Bhopal Group for Information and Action.

Sarita Malaviya of the Children Against Dow Carbide said, “The CBI should already have moved the courts for ex-parte proceedings against Union Carbide and Dow Chemical and for attachment of the assets of Dow Chemical in India. But it looks like they are still waiting for the Prime Minister to issue directions on this matter.”