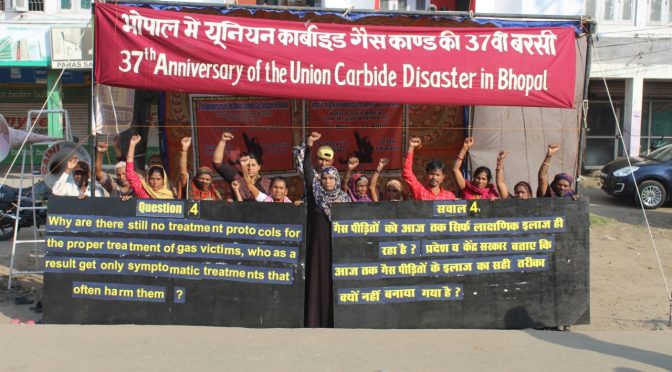 On the fourth day of their 37- day campaign, the survivors of Union Carbide Disaster in Bhopal today sought answers from the state & central governments regarding medical care of Bhopal gas victims. Despite the passage of 37 years the mainstay of healthcare of the survivors continue to be symptomatic drugs that provide temporary relief if at all. They asked,”Why are there still no treatment protocols for the proper treatment of gas victims, who as a result get only symptomatic treatments that often harm them?”

In the last three days, we have asked questions on compensation & environmental remediation. Rashida Bee, President of the Bhopal Gas Peedit Mahila Stationary Karmchari Sangh said, “While both central and state governments agreed in 2010 that the American corporations had to pay additional compensation, neither has filed an application for urgent hearing of the Curative Petition pending before the Supreme court till today. We want to know why the governments have chosen not to get the petition heard for the last 11 years.”

“Since 1989, 17 reports from governmental & non governmental agencies have confirmed the presence of pesticides, heavy metals and POP’s inside the factory. In 1997 NEERI identified 21 unlined pits within the abandoned factory premises where hazardous waste was dumped. So, our question is why hasn’t the owner of the land contaminated by Union Carbide/Dow Chemical, the MP govt ever sought compensation for environmental damage”, said Shehzadi Bee of the Bhopal Gas Peedit Mahila Purush Sangharsh Morcha.”

Rachna Dhingra of the Bhopal Group for Information & Action questioned the central and state government’s integrity and lack of common sense in assessing the total number of deaths due to exposure related illnesses. In its curative petition Govt of Madhya Pradesh claims that 5295 people have died due to the gas disaster. On the other hand it provides pension to 5000 women who have been widowed due to the disaster. So, how is it possible that gas only killed married men and only 295 women, children and unmarried men were killed due to the disaster.”

Through the Campaign – “Bhopal Disaster : 37 years ; 37 questions” – the organizations wish to highlight urgent concerns regarding compensation, criminal justice, medical, economic and social rehabilitation and environmental remediation of polluted lands that need to be addressed to stop the ongoing disaster.