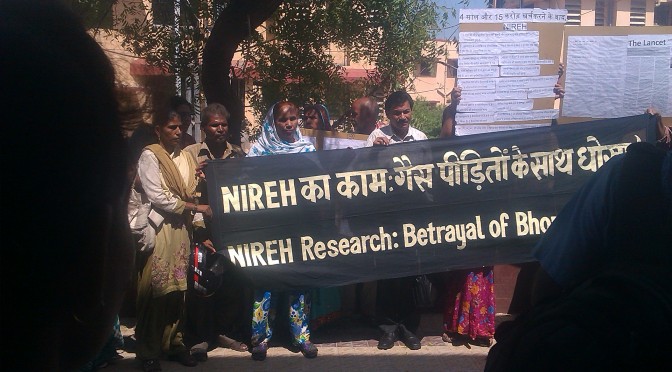 Five organisations working for the welfare of the survivors of the December ’84 Union Carbide disaster in Bhopal today demonstrated outside the National Institute for Research on Environmental Health (NIREH) during its 4th foundation day celebrations. They charged this 31st center of the Indian Council of Medical Research (ICMR) with betrayal of the interests of the survivors.

END_OF_DOCUMENT_TOKEN_TO_BE_REPLACED

Bhopal: Bhopal Memorial Hospital and Research Centre has been carrying out clinical trials on gas victims. CNN-IBN has accessed documents that show that at least 80 per cent of the patients on whom trials were conducted, were victims of the gas tragedy.

What was suspected and alleged so far is confirmed now. The multi-specialty hospital set up for gas victims conducted unethical drug trials on 279 patients of whom 215 were gas victims. These figures have come from a letter written by the Hospital’s director Brigadier KK Maudar to the deputy drug controller of India, Dr R Ramakrishna on February 22, 2011. The letter also gives a break up of the drug trials

Finally in the Anesthesiology Department, trials were conducted on seven patients and five out of the seven were gas victims.

The Indian Council for Medical Research in its ethical guidelines for biomedical research on human participants has categorically said that adequate justification is required for involvement of those with reduced autonomy. In Bhopal, no such justification has been offered. In fact, the hospital first denied that the drug trials were conducted on gas victims.

CNN-IBN had first reported about the unethical drug trials in June 2010 following which an enquiry was constituted. At that time, the hospital had denied conducting any of those trials on gas victims. Now CNN-IBN has accessed documents which reveal that 34 patients were chosen for the trial of the drug Tigecycline. Two patients out of the 34 died and both were gas victims.

In the information furnished to the Directorate General of Health services, the hospital said that it does not have any information on if and how the consent from the patients was obtained.

The hospital in its communication with the Directorate General of Health services has accepted the fact all those who died during the trials were gas victims but refused to give their names and addresses. Those working to expose the unethical business of drug trials on gas victims have been demanding action against the hospital authorities.

According to an estimate, clinical trials in India are heading towards a whopping Rs 3000 crore business. Ethics in such a scenario are of little concern and the emphasis is on speedy trial of drugs to get the product launched.

The following press statement was issued today by Bhopal survivors’ organisations and their supporters.

Over two hundred survivors of the December ’84 Union Carbide gas disaster today held a demonstration at the office of the Chief Medical Officer [Gas Relief] at 11.30 AM. Led by four organizations active on the long pending issues of the disaster, the demonstrators opposed the proposed handing over of the Gas Relief hospitals to the State Health department.

· Keeping in view the special needs for medical care and research of the survivors, the Supreme Court set up special Monitoring and Advisory Committees last year. This decision of the State government will take away any possibility of special medical attention towards the health problems of survivors and their children.

· The government’s research agency Indian Council of Medical Research and several independent specialists have stressed the need for long term medical care, research and health monitoring of the survivors and their children. While survivors and their children need the work of medical rehabilitation to continue for the next 50 years, this decision will bury the continuing medical issues of the disaster.