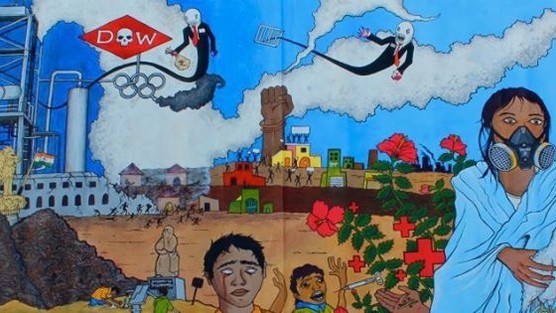 Please support this important endeavor and sign our petition now!

Text of the  petition:

“Victims of the gas disaster in Bhopal haven’t got justice even after 30 years. Majority of them haven’t received adequate compensation. We are asking Ananth Kumar, Ministry of Chemicals and Fertilizers, to take decisive action to get us justice.

I was living with my husband and two children when the poisonous gases leaked from the Union Carbide factory that was just half a kilometer away from our house. We all ran to escape death. However we still inhaled a lot of toxic chemicals to remain sick for the rest of our lives.

My husband was diagnosed with chronic lung disease and has survived a heart attack. Both my son and daughter have also had to be hospitalized long after the disaster.

Since 1984, more than 25,000 people have been killed and 150,000 people are today battling chronic illnesses. Tens of thousands of children born after the disaster to gas exposed parents suffer birth defects and developmental disorders.

Since then we have been fighting to get adequate compensation for all those who were affected. After years of fighting we thought we had a breakthrough when the Govt of India took action.

In June 2010, our government acknowledged the injustice in compensation distribution and filed a Curative Petition in the Supreme Court of India claiming an additional amount of 1.2 billion dollars from Union Carbide Corporation and its current owner The Dow Chemical Company, USA.

However, this case appears to have been forgotten. In the last 4 years, there has not been a single hearing. We are urging the new Minister in charge of all matters related to the Bhopal tragedy to

1. Revise figures of death and extent of injuries caused by the 1984 Union Carbide gas disaster in Bhopal

2. Move for Urgent hearing of the Curative Petition in the Supreme Court after this revision.

The demand for adequate compensation for Bhopal victims is a demand for justice for all victims of corporate crime. If justice is done in Bhopal, corporations will be that much careful about putting profit before the lives and health of people. Justice in Bhopal is important for a safer future for us and our future generations.