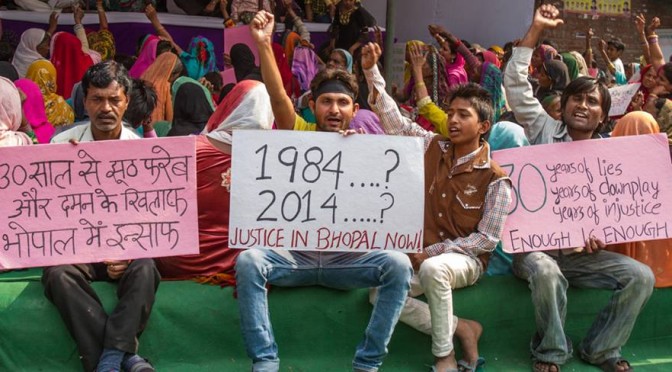 “If I told you that one of the world’s largest companies had run away like a thief in the night and left mountains of poisons behind…would you doubt me?” -Gary Cohen, Activist

When the Independent speaks of “rape,” the Guardian of “disgrace” and Jon Snow of “a crime against humanity,” they are not talking about THAT NIGHT – but of what has happened since to those who survived it. More than three decades after the disaster, Bhopal remains a humanitarian disaster and a global symbol of corporate negligence.

Court Cases: Pushback Against the 1989 Settlement

The legal battle for just compensation, which is still being fought today, started  in response to the unjust and despicable 1989 settlement.  See also Timeline: Indian Court Cases 1990-Present.

In 2001 the Dow Chemical Company (Dow) bought Union Carbide and all its liabilities. Despite this, Dow refuses to take legal responsibility for Bhopal, spinning lie after lie in an effort to get out of its legal obligations.

The disaster may have lasted only one night, but the health effects have no end, with medical issues being passed on to the second and third generations, ensuring the medical issues, financial burdens, and heartbreak never end. See also Timeline: Medical History.

A brief overview of the Sambhavna Medical Trust, a medical clinic started by survivors and activists to meet the medical needs of the survivors.

See 5. Contamination & the Ongoing Disaster to find out about the present-day water contamination crisis in Bhopal.