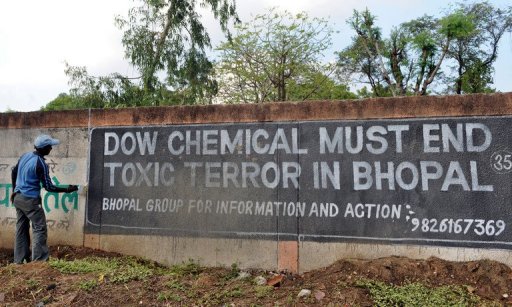 “If you define ‘liability’ simply as the ability to lie, then Dow’s in liability up to its ears.” - Ryan Bodanyi, Former Organizer of Students for Bhopal

In 2001 the Dow Chemical Company, based in Midland, Michigan, USA, purchased the Union Carbide Corporation and all its assets and liabilities. To this day, Dow-Carbide has refused to:

In order to avoid taking responsibility for Bhopal, Dow has spun a web of elaborate lies. Using many contradictory reasons, it claims it has no liability in Bhopal. ICJB has compiled Dow’s most blatant lies and the facts that prove Dow wrong:

Dow Chemical has been consistent in its refusal to admit liability for the Bhopal disaster, arguing that the 1989 settlement  between Union Carbide and the Government of India of $470 million resolved all liabilities.

Before acquiring Carbide, Dow asserts it did an “exhaustive” study to determine any liability for Bhopal. They obviously did not “study” very hard, as there is ample evidence Carbide’s criminal and civil liabilities are still very much in existence. Yet they continue to claim, “there is no legal foundation for application of liability.”

Lie #2: “The liability belongs to Union Carbide, not to Dow.”

Lie #3: “The Indian Government has no jurisdiction over Dow-Carbide.”

Dow Chemical has stated publicly that it has no intention of surrendering its subsidiary for trial. In December 2003, Dow spokesperson John Musser claimed that  “[Dow’s] position on the matter is that the Indian government has no jurisdiction over Union Carbide or Warren Anderson; therefore, they are not appearing in court.” This fabrication has been used by others, including Dow’s Indian lawyer and spokesperson, and the Indian Law Ministry.

Dow’s propaganda website, bhopal.com, claims that, “In 1998, the state government of Madhya Pradesh revoked Eveready Industries’ lease on and took possession of the facility and publicly assumed all accountability for the site, including the completion of any further remediation.” Therefore, Dow argues, the Madhya Pradesh (MP) government, the “current” owner of the site,  is responsible for the cleanup. Dow also claims that the $300 million in interest that have accrued on Union  Carbide’s original 1989 settlement should be used to pay for the  cleanup.

During the administration of the merger of Dow Chemical and Union Carbide, officials from both companies stated: “there are no…criminal…actions, suits, claims, hearings, investigations or proceedings pending…No investigation or review by any Government Entity with respect to it or any of the subsidiaries is pending.”