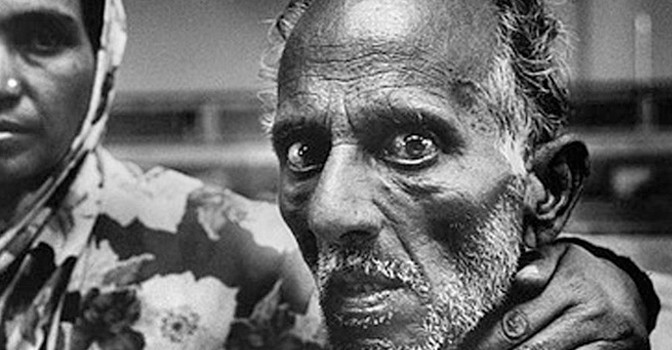 “Survivors have said that the fortunate ones were those who died immediately: their suffering was over. Those who did live have faced not only illness but continuing uncertainty about their health, their future, and their children. Women don’t know whether they should give birth; whether their bodies can produce healthy life. Doctors don’t know how to treat the gas affected.

On the night of the disaster the Union Carbide doctors told the panicked Bhopal hospital staff that MIC was no worse than a tear gas. Wash the eyes with water, they said – it will pass…the effects of the gas are clearly systemic and in many cases permanent, [but] Union Carbide has provided no further information about the chemical they created and used. However, they have done research. For example, in their manual entitled Methyl isocyanate F-41443A-7/76, they cite a paper “U C Pozzani and E R Kinkead, Animal and Human response to Methyl Isocyanate, a paper presented at the May 16-20, 1966 Meeting of the American Industrial Hygiene Association, Pittsburgh, Pa.” This paper has never been released. The same manual cites [the] addition[al text] “Unpublished work of Union Carbide Corporation.” Union Carbide officials have in fact done their best to provide disinformation about the gas leak. By downplaying the effects of MIC and withholding medical information about MIC, they attempt to [hide] their own liability.

An unprecedented mass exposure to MIC would be difficult to address under any circumstances; but in Bhopal the attempts to heal the worst affected have been additionally hindered by pre-existing poverty and enduring class discrimination. Economic hierarchies and communal differences were, and remain, firmly entrenched in the city of Bhopal. The doctors and bureaucrats, drawn from the upper eschelons of society, often discriminate openly against the lower classes. And because, lacking statistical evidence and a diagnostic protocol, the symptoms of poverty and the symptoms of gas exposure can resemble each other, many of those entrusted with curing the gas affected would rather just diagnose, and ignore, the poverty itself. Sickness, impeding work, causes increased poverty and increased sickness, creating a miserable and unbroken cycle.

This dynamic is reinforced and enabled by the non-visible nature of the illness caused by the gas, and similarly the water contamination. The leaking gas did not blister the skin; its symptoms are multifarious and often invisible, comprehensible and distinguishable only by carefully and scientifically documenting the health of the affected communities across generations…the gas-affected communities do continue to get sick and to die at much higher rates than normal, and to suffer from particular symptoms – some of which defy the available vocabulary. However, as nearly all of these studies conclude, the research needed to develop an understanding of the effects of the gas, and to intelligently treat them, is still grievously lacking.

This dearth of research is itself criminal. Immediately after the worst industrial disaster in history, the Indian Council for Medical Research (ICMR) began eighteen long-term, large-scale, government funded medical studies of the first and second-generation effects of gas exposure. These studies, the only ones that had the funding, timing, and scope to understand the impact of the disaster, were suddenly and prematurely terminated in 1994 with no explanation. When their limited conclusions were finally released in 1996, the scientists were only able to ruefully note that “It would be desirable to extend the long-term study of the same cohort in Bhopal.” Some suggest that the studies were terminated when conclusive evidence of second-generation damage began to emerge, an eventuality that would have radically increased the liability of the corporation, and perhaps the government.

Independent scientific and medical studies, such as the report of the International Medical Commission on Bhopal (IMCB)…or the study on second generation effects published…in the Journal of the American Medical Association (JAMA), have unfortunately been unable to replace the government studies due to their sporadic nature and limited funding. Additional work, such as Daya Varma’s study on the effects of MIC on pregnancy, and Ramana Dhara’s report on the lack of information about the gas, underline the desperate need for further research on the health consequences of the Bhopal disaster. Meanwhile, in Bhopal, sickness is a daily reality.” – The Bhopal Reader (2004)