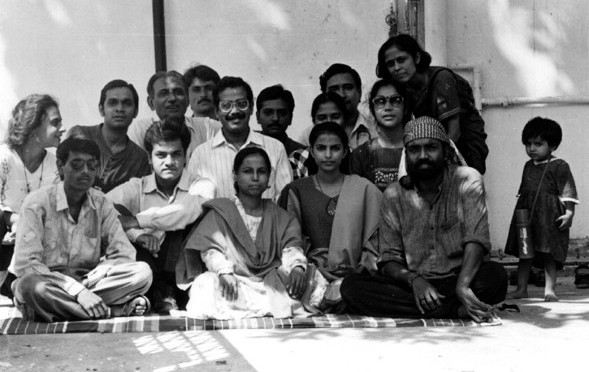 In 1996, a small group of survivors and supportive activists started the Sambhavna Trust Clinic, a non-profit medical establishment. Its operating costs are covered mostly by donations from individuals around the world, with much of the financial support coming from citizens of the United Kingdom and managed by the Bhopal Medical Appeal.

In the prevailing situation of despair, the Sambhavna Trust believes in creating possibilities by generating compassion. At Sambhavna, survivors are offered free medical care through allopathy, ayurveda (an indigenous system of medicine based on herbs), and Yoga. The staff of the Sambhavna clinic include many highly trained medical personnel, including allopathic and ayurvedic physicians, yoga and Panchakarma therapists, and community health workers, who carry out health surveys, health education and community programs for better health. Many of the medical and support staff are survivors themselves and suffer from some of the same ailments as the many patients.

The work carried out by the Sambhavna Trust has shown that it is possible to evolve simple, safe, effective, ethical and participatory ways of treatment monitoring and research for the survivors of Bhopal. However, Sambhavna is small compared to the magnitude and complexity of the disaster. While an estimated 120,000-150,000 survivors of the disaster are today chronically ill, the clinic run by this trust can only provide direct treatment to tens of thousands and provide support to about the same number through its health initiatives in communities close to the Union Carbide factory.

Sambhavna’s treatment and research work is extremely important – by the shear fact that no one else is doing any. For instance when girls, who had been babies or were in the womb at the time of the disaster, reached puberty in the 1990s, many suffered from severely abnormal menstruation: some do not menstruate at all, or have a period only once in three months, while others bleed three times a month. No work is being done on this, except by Sambhavna. It remains an officially unacknowledged epidemic. Because almost no one is conducting research on the health effects of the gas, epidemics without treatment protocols are sweeping through the population. A report from Sambhavna observed, “The alarming rise in cancers, tuberculosis, reproductive system problems and other problems such as growth retardation among children born after the disaster remain undocumented.”