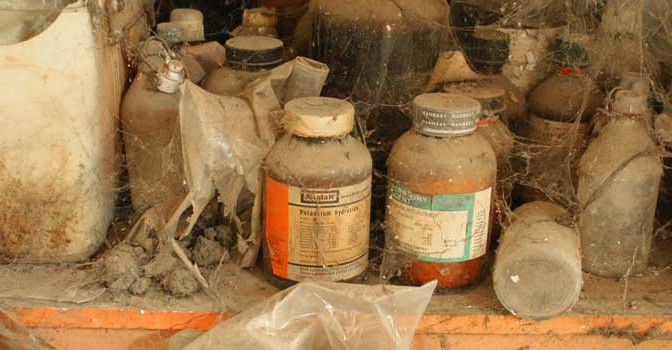 “As early as 1972, Carbide’s American managers talked about the danger of ground-water pollution from that terrible factory. They made their own proposals to stop it happening – and then ignored them. Instead, knowing the dangers, they set about dumping thousands of tonnes of solid and liquid chemical wastes into and outside the factory. They knew it would poison our water and our daily lives and they did it anyway.” –  Rashida Bee, leader of one of the Bhopal survivors’ organizations

The Union Carbide factory in Bhopal began manufacturing pesticides in 1969. The factory was positioned close to established working class settlements and one and a half miles from the center of the heavily populated old city. Despite the sizeable communities living around its periphery, between 1977 and 1984 the Carbide factory was licensed by the Madhya Pradesh Government to manufacture the extremely hazardous chemicals phosgene, monomethlyamine, methyl isocyanate (MIC) and the pesticide Carbaryl, also known as Sevin.

Even before the 1984 gas disaster, there were troubling incidents taking place near the factory – the smell of boiled cabbage regularly wafted over nearby neighborhoods, cattle mysteriously died. Rumors began to spread concerning what could possibly be going on inside the factory. UCC tried to squash these fears, stating simply it was making “medicine for the fields.” But with persistent investigation, we now know the real cause of these incidents.

Dumping Death on to the Fields

According to former workers of the factory, from the opening of the factory in 1969 to December 1984 a massive amount of chemical substances formulated in the plant – including pesticides, solvents used in production, catalysts, and waste by-products – were routinely dumped into pits situated in the north, east and southeast of the factory premises. Union Carbide even failed to take precautionary measures for the disposal of numerous materials generated on site for use in pesticide production, which included deadly substances such as aldicarb, carbaryl, mercury, and several chlorinated chemicals and organic poisons. These came in the forms of solid, liquid and gas, causing pollution in the soil, water and air.

Although huge amounts of waste were simply buried, Union Carbide failed even to take this slip-shod measure for the disposal of numerous other materials generated on site for use in pesticide production. Consequently, residues and waste materials weighing hundreds of metric tonnes were eventually contained in five storage areas upon the surface of the site, including an open cycle shed, a soapstone shed, the formulation building and two godowns.   Waste materials categorized as hazardous (as per the Hazardous Waste – management and handling – Rules, 1989) and identified above the surface of the site are as follows:   i) Sevin (carbaryl) tar residue;  ii) Napthol tar residue;  iii) Hexachlorocyclohexane (HCH), also known as benzene hexachloride (BHC, Lindane) solids   . A very large quantity of Sevin corroded the steel tank in which it sat and spilled onto open ground in front of the Sevin formulation plant.

The Poisoning Below Ground

In 1977, as part of their Phase II expansion plan of the Bhopal factory, Union Carbide constructed three “Solar Evaporation Ponds” (SEPs), which were built to hold industrial waste. Ponds I and II were  used regularly, while Pond III was  for emergencies. They covered an area of 14 hectares and are located 400 meters north of the factory. Several thousand tonnes of toxic wastes and by-products were henceforth dumped at these sites. The wastes were separated from the soil beneath by just a thin plastic barrier sheet of polyethylene. The ponds are in essence just giant outdoor holes – each about the size of a soccer field.

The land where the ponds were dug was acquired for UCC by the Madhya Pradesh government Department of Industries. They took it from five farmers who were paid no compensation. Chemical toxic wastes and by-products were henceforth also dumped at these sites, with the presumption that the toxic chemicals would dilute in the water and evaporate into the air. But every year during the rainy season the ponds overflowed, leading to the contamination of large areas of surrounding farmland. In addition, toxic effluents were routinely discharged into an open sewage drain flowing past Jai Prakash Nagar, a community on the South side of the factory, which was later badly affected by the 1984 tragedy.

In 1981 and 1982 several cattle died through exposure to poisonous water in the SEPs, prompting a formal police complaint. By 1982-83 farmers in the vicinity of the SEPs were experiencing drastic reduction in the fertility of their soil due to the overflowing toxic water. Two tube wells dug in the neighborhood of the SEPs had to be abandoned because of the noxious smell and taste of the water. A lawsuit brought by farmers resulted in an out-of-court settlement with UCIL.

These problems were not surprising to Union Carbide’s top brass. They knew for decades that their disposal practices in Bhopal were leading to massive contamination of the soil and groundwater, and  their sole concern was how to evade responsibility and to cover it up.

Internal UCC documents, unearthed in 2002 as part of the class action lawsuit filed in the New York District Court on behalf of Bhopalis affected by this contamination, reveal that Union Carbide’s Engineering Department warned of the danger of groundwater contamination as early as July 21, 1972. Union Carbide officials recognized problems with the SEP proposals for the site and forewarned that their proposed design risked the “danger of polluting subsurface water supplies in the Bhopal area.” To avoid this, “new ponds will have to be constructed at one to two-year intervals throughout the life of the project.” This advice was ignored, and no extra ponds were ever constructed.

By 1982, the contents of the ponds were leaking out. Union Carbide documents reveal that on March 25, 1982 Union Carbide officials learned about a major failure of the SEPs through a panicky telex  sent from India to UCC headquarters in Danbury, informing them of a leak. Some days later, on April 10, UCC officials were informed that the toxic materials from the Phase II SEP were spreading into the subsurface water reservoirs of Bhopal: “Continued leakage from evaporation pond causing great concern.”

After the disaster of 1984, Union Carbide was keen to distance itself from Bhopal. The plant ceased normal operations. However, until August 14, 1998, Union Carbide India Ltd. had 40 operators on the site involved in management, disassembling and waste disposal. Subsequently, the site was abandoned by the company and came into possession of the Madhya Pradesh state government: remaining warehouses, management buildings, chemical units, chemical waste and all. Today more than 20,000 people live in close proximity to the factory site.

UCC and UCIL left behind tons of toxic wastes strewn in and around the factory site.  UCC warned no one of the  ground and water contamination, so the communities near the factory continued to use the local wells, not realizing just how dangerous it was until many years after the disaster. By this point in time, they had been drinking contaminated water for years and passing fatal chemicals on to their children, the next generation.

The land situated north, north-east and north-west of the Union Carbide factory has seen a prodigious amount of housing development since 1984. In 1988 two of the newer communities, Atul Ayub Nagar and New Arif Nagar, began to grow and are situated closest to the factory’s perimeter fencing, proximate to some of the most severely contaminated water sources. Characterized by make-shift, single story slum dwellings, the two settlements sit between the factory and the Bhopal-Ujjain rail line. A further twelve colonies that have developed around the area since 1988 are also known to have access primarily to contaminated water. Because UCC and the Government of India provided no warnings to these people regarding the safety of this land and its water, the people continued to move here.

Despite their recent residency in these areas, many of the residents are registered voters. Data taken from voters lists indicates that 16,230 people reside in these water-polluted communities. Community estimates place the population figure well above 20,000. A high proportion of the population of these communities are survivors of the 1984 gas disaster, already suffering chronic effects of chemical exposure.

Read more about the contamination of Bhopal in: The Evidence Union Carbide Doesn’t Want You to See

The names of the chemical substances dumped in Bhopal and their approximate weight are detailed in an affidavit, submitted to the New York District Court, by ex-UCIL employee Mr. T.R. Chauhan:

* During the unsuccessful operation of the alpha-naphthol plant several chemical compounds weighing over 100 MT also caused pollution of soil, water and air.