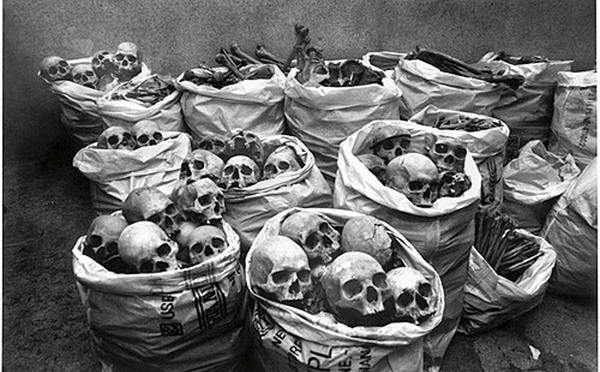 The photo above was taken by the famous photographer Raghu Rai. He found these sacks in a storeroom at Hamidia Hospital in Bhopal. They are the skulls of people who died in the gas disaster and were then autopsied. One of them wears the sliced-off top of his or her own skull like a hat. People look awfully alike when they’re dead, but each of these people once had a name, a face, a life, a family.

What was lost in Bhopal that night? How can it possibly be quantified? We’ll never be able to understand what was lost, but we can try to make sure that the people who died are remembered and that the number of deaths is not underestimated.

How many people actually died?

In the days immediately following the disaster, countless unnamed victims were hastily buried in mass graves and cremated on huge pyres. Indian army trucks transported corpses to forests and rivers and dumped them there, or took them for mass burial in other cities.

One of ICJB’s first activists, a boy called Sunil, woke up to find himself in a pile of corpses in a town about 20 miles from Bhopal. He was lucky not to be burnt alive.

At the railway station a whole tribe of gypsies was encamped and every single one perished, men, women and children. Not one was left alive to say who they were, or what their names were. Their deaths were not counted. Many people couldn’t prove the deaths of their family members because they lacked the requisite documents. One man lost sight of his young daughter in the stampede to escape the gas: he never saw her again, and without papers couldn’t prove to the authorities that she’d ever even existed, leading him into a kind of Kafkaesque nightmare.

The true death-toll may be much higher than anyone realizes.

Why ICJB Says AT LEAST 8,000 Died in the Immediate Tragedy

An internet search on the terms “Bhopal” + “death toll” produces nearly 20,000 hits. The chances are that different figures are quoted on each site. Even official figures seem to change at the whim of the author of each webpage and press article. While some take refuge in generalities, quoting figures in round thousands, others produce precise figures. For example, in July 2002 the Houston Chronicle claimed that 3,849 lives had been lost in the disaster. Wildly wrong.

Definitive figures as to how many people died that night and in the immediate aftermath simply do not exist. The truth is that we shall never know the exact amount.

It has been established, using research carried out by an international health organization at the time, that some 7,000 funeral shrouds were sold in Bhopal in the three days following the gas leak. But this figure relates only to the number of corpses that were cremated or buried in the first week.

In this way, assuming that at least a thousand people were simply never reported dead, we say that at minimum 8,000 people died in the immediate tragedy.

The Testimony of Mohammed Karim

ICJB also takes into account the  testimony of municipal workers, who picked up bodies with their own hands, and who reckon they shifted at least 15,000 bodies.

Mr. Mohammed Karim used to drive a municipal waste-disposal truck. Here is his testimony, exactly as it was recorded:

“I used to drive a truck to dispose of dirt and waste. My truck was also a special truck – I used to pick up unclaimed dead bodies from the mortuary, I was used to doing it. That night [3rd December 1984] I put in thousands of bodies that we dumped – in one grave we would put 5-6 bodies, and we burnt piles and piles with logs. Many bodies were burnt unindentified – Muslims were burnt and Hindus were buried. [Following religious rites, Muslims should be buried and Hindus burned after death.]

“They [the government] said “Leave your wives and children in your houses and go on duty.” We used to be on duty till 12:00 at night and after that the military trucks used to come and dump the bodies in the Narmada river. This went on for three to four days. Even on the 16th [of December 1984] we had to come back again. They gave us 500 rupees for this but then they took it back from our wages.

“We would fit 120 bodies in one truck and this we would fill and empty five times a day. There were eight trucks on duty [so that is 4,800 bodies a day]. It carried on for exactly the same intensity for three to four days, and after 12:00 am the military took over.

“We took a bulldozer and dug pits to bury all the animals. Some people were picking up bodies and some animals. 50 – 60 drivers were all working that day [the 3rd of December]. We picked up the bodies with our own hands. Every time we picked one up it gave out gas. The bodies had all turned blue, and had froth oozing from their mouths.

“In some houses everyone had died so there was no one to break the locks. In one case a 6 month old girl had survived and everybody else [mother, father and siblings] was dead. I broke the locks to that house.

“Those who have survived are like the living dead. My lungs have become useless: still today I’m being looked after by Hamidia Hospital. Ever since I got affected I get vertigo – I would have to stop my truck because I get vertigo if I drive. My hands and feet don’t work. I can’t see well. The last two to three years I’ve gotten much worse.”

If Mohammed Karim is right – and he was there among the bodies immediately after the disaster  – the initial death toll could have been as high as 20,000.

In addition to those who died choking in the gas cloud, and those who perished in the immediate aftermath, people have continued to die in Bhopal from their injuries, and are still doing so. The official death toll to-date (local government figures) of people who have died as a result of the disaster stands at more than 20,000 people. Even now, decades after the disaster, it is estimated that still one person per day dies in Bhopal from the injuries they sustained on that night.2

The numbers of people dying in earlier years was much higher than now. For example in 1997 the Madhya Pradesh Department of Gas Relief and Rehabilitation announced that about 1,400 people had died that year alone of gas-related illnesses. The Office of the Medical Commissioner on the 1st December 1999 had registered 22,149 deaths directly related to the gas disaster.

Not all gas-related deaths are registered. After the disaster many gravely ill people left Bhopal and their deaths are not added to the figures. Others simply never found their way into the statistics.

Taking all of this into consideration it is perfectly possible that even  the highest estimate of 30,000 deaths is too low.

1Figure of 8,000 cited in New Scientist Magazine. “Fresh evidence on Bhopal disaster.” December 2, 2002 (Last accessed September 2014). Estimates come from independent relief organizations working in Bhopal immediately after the gas leak and were based on evidence such as the number of funeral shrouds (kafans) sold by the local Cloth Merchant Association. See also: “Five Past Midnight in Bhopal.” Javier Moro & Dominique Lapierre. 2001. pgs. 365-366.