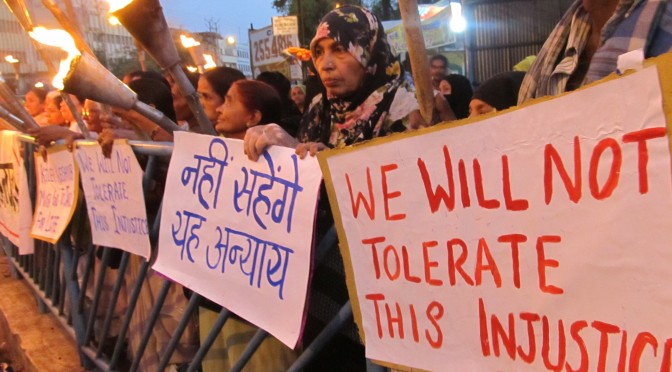 In a letter to Union Carbide stockholders on February 27, 1985, less than three months after the gas leak, Carbide CEO Warren Anderson wrote:

“In an earlier communication, we advised stockholders of counsel’s opinion that victims of the Bhopal tragedy could be fairly and adequately compensated without a material adverse effect on Union Carbide’s financial condition. We wish to reaffirm that opinion, and our belief that a prompt and equitable settlement is in the best interests of all concerned.”

How could Warren Anderson be so confident that a prompt and equitable settlement could be reached? Perhaps because he had already met Indian officials in Washington who encouraged him to take the initiative in proposing a settlement.

On February 28, 1985, one day after Anderson wrote to stockholders, top Carbide official Rolf H. Towe and Union Carbide India Limited’s managing director, V. P. Gokhale, proposed a negotiated settlement at a meeting with B. B. Singh, Secretary of India’s Ministry of Chemicals and Fertilizers.

According to the minutes of the top secret meeting, the Carbide duo told Singh that Warren Anderson had already met the Indian ambassador in Washington and had been told that “the Government of India had an open mind on the issue” of a settlement, but the Indian government would like Carbide to take the first step. On March 4, Carbide duly made a formal proposal aimed at “avoiding protracted litigation in India or in the US by or on behalf of the claimants.”

The proposal envisaged “payment of a predetermined fixed sum or money by UCIL and UCC to the central government.” Carbide used the Indian Railways Act payment rate for accidental deaths as a guide to fix the amounts to be paid for deaths and injuries stemming from the disaster. This guaranteed Union Carbide minimum financial loss. UCC also proposed categories of injury that were at best unscientific and at worst savagely cruel to the victims. Union Carbide’s definition of temporary injury conveniently covered 94% of the victims, nearly all of whom were people with injuries that would last the rest of their lives.

How the Settlement was Negotiated

In March 1985, through the passage of the Bhopal Gas Leak Disaster (Processing of Claims) Act, the Government of Indian (GOI) arrogated to itself the sole power to represent the victims of the disaster in civil litigation against Union Carbide. This meant that survivors themselves could not bring cases against Union Carbide. GOI then filed a $3 billion compensation suit on behalf of the victims in US federal court. The case was quickly sent back to the Indian courts in May 1986 on the grounds of forum non-convenience – meaning that the American court believed the case was not under United States jurisdiction and that the more appropriate forum would be a court in India. The American judge, Hon. John F. Keenan, sent the case back to India under the condition that Union Carbide would submit to the jurisdiction of Indian courts.

Union Carbide’s lawyers then devised a plan to delay all legal proceedings in order to squeeze the Indian government into accepting a low settlement. Union Carbide did all it could to stymy the court, including:

Union Carbide’s first settlement offer was a paltry $100 million dollars, less than half of what the company’s liability insurance would cover anyway. It wasn’t until 1989 that a settlement was reached between Carbide and the Indian Government – one made without the consultation or consent of the survivors themselves. Union Carbide agreed to pay the paltry figure of $470 million dollars to the GOI, and it came with some major catches.

Killer Corporation Demanded It Be Above the Law

Union Carbide arrogantly dictated to the Indian government that “in exchange [for its cash payment], UCIL and UCC will require that all claims by Indian citizens, corporations, partnerships or other entities arising out of, or connected with, the Bhopal gas leak disaster against either or both of [UCC and UCIL], their affiliates, directors, officers and employees to be fully released and extinguished in all respects.” In other words, the buck would stop with the settlement – no other demands could be made against Union Carbide by anyone. Disgracefully, the Indian government agreed. It was this proposal that formed the basis of the 1989 agreement.

In summation, the 1989 Settlement, agreed to by the GOI and UCC, instituted the following:

In exchange for the payment:

The final figure of $470 million was only 15% of the original settlement amount that the GOI had asked for. The settlement was insulting. The amount was far below international compensation standards as well as those set by Indian Railways for accidents.

It awarded survivors just cents a day – the cost of a cup of tea – for a lifetime of unimaginable suffering. People who have suffered incapacitating health problems every day for decades were classed as “temporarily injured” and accordingly awarded this pittance. With 10,950 days between December 3, 1984 and December 3, 2014 and with compensation of about $500, survivors have received about 4 cents per day to cover life-long injuries.

Union Carbide Profited from the Disaster

By 1989, Carbide had spent at least $50 million on legal fees alone. How much they spent on PR companies such as Burson Marsteller, who they hired from Dec. 20 1984, has not been disclosed. The low settlement amount was a huge boon for the corporation. By “restructuring” (asset stripping) in the immediate aftermath of the disaster, UCC landed its managers and major shareholders huge windfalls in stock payments and golden parachutes. It paid only $200 million (or 43 cents a share) of its own money to settle the world’s largest peacetime massacre (the rest of the amount was covered by its insurance carrier). In fact its annual report described 1989, the year of the settlement, as its “best financial year on record.”

Immediately after the settlement was finalized, survivors began to protest. But in April 1989 Union Carbide shareholders voted against increasing compensation to the victims, despite the injustice of the amount.

Between 1990-1991 the Bhopal victims filed suit to overturn the settlement. The case went all the way to the Indian Supreme Court. Citing inaccurate statistics for the number of dead and injured victims, in 1991 the court ruled that the settlement amount would stand, however at the same time the court reinstates the criminal cases against Carbide, its CEO Warren Anderson, and other officials.

It is the injustice of the 1989 settlement that has spurred ICJB to demand for a Curative Petition to redress this wrong. A Curative Petition would use the correct figures of dead and injured, and ask for compensation linked to a scientific assessment of the injuries that people continue to suffer. Read more about this – XXXXXXX

Court Cases: Pushback Against the 1989 Settlement