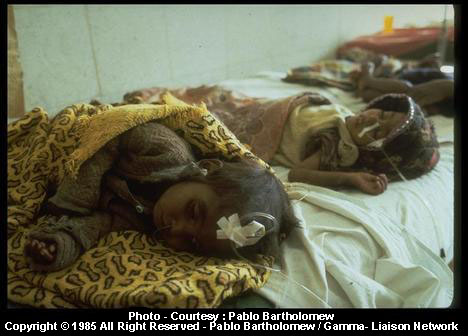 On “THAT NIGHT” and in the immediate aftermath of the disaster, the medical system in Bhopal was severely tested by the overwhelming numbers of injured. The medical response ranged from inadequate to catastrophic. The dead and dying overflowed the hospitals.

For fear of compounding their legal liability, Union Carbide would not identify the chemical agents that fueled the catastrophe, leaving doctors to treat victims without a definitive answer as to what was causing their agony.

Hospital officials frantically called Union Carbide, seeking a treatment protocol. When they finally got through, they were blithely assured that the gas, which was killing thousands, was “nothing more than a potent tear gas,” and that victims merely had to “wash their eyes with water.” As the bodies stacked up higher and higher, in a show of publicity UCC flew a series of “top medical experts” to Bhopal to sing a chorus of reassurance. Dr. Hans Weil, who had been reprimanded for unethical conduct by a USA court for fudging medical data on behalf of the Johns-Manville Corporation, predicted that “most victims would fully recover.” Pulmonary specialist Thomas Petty, also flown to Bhopal by UCC, said that victims were “recovering rapidly.” No report made by Carbide-sponsored doctors was made available to the Indian government and their medical officers.

Doctors in the hospitals knew the situation was more serious, but in the absence of a protocol for treatment they could do little more than treat on a symptomatic basis. Thus, for eye problems they used atropine, local antibiotics & padding. Breathing difficulties were tackled with broncho-dilators, antibiotics, steroids, diuretics and oxygen. MIC was undoubtedly the major toxin released in the accident, and the circumstances (a very violent hydrolytic & exothermic reaction in the victims’ bodies) made it HIGHLY LIKELY that impurities (phosgene) or decomposition products (hydrogen cyanide, nitrogen oxides and carbon monoxide) were involved.

Suspicion that some deaths were due to cyanide arose from the rapid fatalities, acute symptoms of syncope & extreme weakness. Autopsies done by Dr. Heeresh Chandra at the local medical college showed cherry-red discolouration of the blood and other organs, and an unpleasant odor of “bitter almonds” when the lungs were opened. Both are thought typical of cyanide poisoning, for which the drug sodium thiosulphate was a known antidote.

Dr. Max Daunderer, a toxicologist from Germany arrived in Bhopal on December 8th bringing 50,000 doses of the drug. He and Dr. Heeresh Chandra soon confirmed that sodium thiosulphate led to the excretion in urine of high levels of thiocyanate, thus aiding detoxification of the body. (A series of double blind clinical trials made by the Indian Council of Medical Research, ICMR, between 1985-1987 would later confirm these findings.) The availability of sodium thiosulphate became literally a life-or-death issue.

Within a day of the disaster Union Carbide’s lawyers & public relations team began doing their utmost to stop the talk of cyanide poisoning. Beforehand, Union Carbide’s own medical director, Dr. Bipin Awasia, who was presumably not been party to the legal strategy, had sent a telex communication to Bhopal recommending treatment with sodium thiosulphate. A few days later a UCC team headed by CEO Warren Anderson arrived in Bhopal, bringing with it the hapless medical director – who by now had changed his story and was affirming that the use of sodium thiosulphate was neither necessary nor advisable.

Union Carbide was desperate to downplay the theory that victims suffered from cyanogenesis (cyanide generated in the body, through the breakdown of a conjunction between MIC and glutathione) because if the victims suffered from internal rather than topical damage it would have major implications in a civil litigation. Union Carbide literally let people continue to suffer in order to minimize its financial liability.

Because Union Carbide opposed the use of sodium thiosulphate, tens of thousands of ailing victims were denied a treatment that double blind clinical trials would show to be highly effective. But success with the treatment of sodium thiosulphate would have proven that the gases had crossed into the bloodstream, thus generating more expensive legal damages against UCC.

On December 13th, just ten days after the disaster, Bhopal Director of Health Services M.N. Nagi sent a circular to doctors warning that they would be held responsible for any negative results due to the use of sodium thiosulphate. This censure, which had no medical basis, effectively stopped any further use of sodium thiosulphate, a drug that could have saved lives.

Meanwhile, the Indian Council of Medical Research (ICMR) had been conducting studies on whether or not sodium thiosulphate helped survivors. A day later, when the ICMR’s early results appeared, they were so good that it began recommending mass use of sodium thiosulphate injections.

Soon a medical clinic, named Jana Swasthya Centre, was started by Bhopal survivors and supporters to give the sodium thiosulphate injections to community residents near the Union Carbide factory. The Centre was run by volunteer doctors who monitored the effects sodium thiosulphate had on the many symptoms of gas exposure.

The Centre survived just 20 days. At midnight on June 24, 1985, Satinath Sarangi, one of the founding members of ICJB, and a fellow colleague were at the Centre. A dozen armed police entered the clinic, and forced them into two jeeps and took them away to separate police stations where they were locked up. The next morning they were sent to jail. Several of the volunteer-doctors and survivors were also arrested and jailed. The charges cooked up against them included attempting to murder government officials and committing other serious offences.

As they later discovered, the rest of the police posse had taken 1,200 medical folders, which had records of all the beneficial effects sodium thiosulphate injections had had on patients. These records were never returned.

During the three weeks that the Jana Swasthya Centre was open, it had given more sodium thiosulphate injections than all the government hospitals had done in the past six months. Unfortunately there were many more people exposed to the gas who never received this vital treatment, because Union Carbide and its corrupt friends in the Indian government did not want people to know what their toxic gas was made of.

The majority of this page was written by Satinath Sarangi.