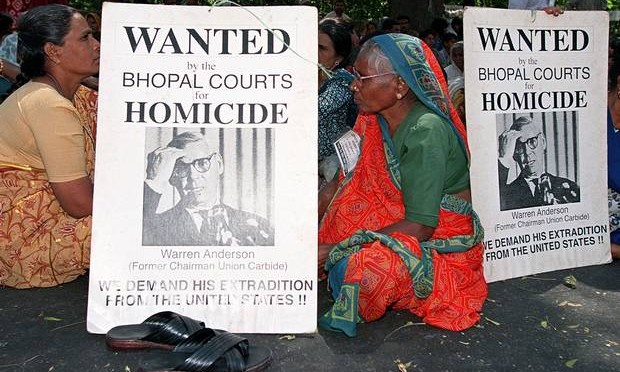 In the wake of the disaster, the Central Bureau of Investigation (CBI – the Indian equivalent of the American FBI) charged top Union Carbide executives, including Chief Executive Officer (CEO) Warren Anderson, and the Corporation itself with culpable homicide (manslaughter) and other serious offenses.

Anderson flew to Bhopal on December 7th, presumably to show off his concern to the media. When he arrived he was notified of the charges against him and placed under house arrest. Although Anderson was later released on bond and allowed to leave the country, he promised to return to face any criminal proceedings.

Faced with a mountain of evidence that its factory had been negligently and shambolically managed, Union Carbide soon began claiming that UCC, the American parent, had no authority or control over the plant’s ultimate design or operations, and thus could bear no responsibility for the disaster. UCC claimed in fact the factory was the sole responsibility of their Indian subsidiary UCIL – Union Carbide India Limited. As demonstrated in the section 1. Creating the Disaster: 1969-1984, in fact every important factory element – from the “unproven” technology used throughout the factory to the MIC unit installed – had been designed and implemented by UCC and their engineers in the USA. And UCC owed 50.9% of UCIL, meaning UCC had control over all UCIL actions. Despite these facts, UCC continued to deny its responsibility and tried to pass the blame onto a saboteur.

Meanwhile in January 1985, just weeks after the Bhopal disaster, the MIC plant in Institute, WV was quietly shut down and received a significant amount of changes to its safety devices before reopening. $5 million was invested on increasing the capacity of the Vent gas scrubber (there were two at Institute – a conventional one like that in Bhopal, and an emergency one, with an extra capacity of 60,000 pounds per hour) by 2.5 times, and larger vent headers were built. The flare tower was improved. Also added were a rate-of-rise temperature monitor and a computerized vapor emission tracking and warning system, which would ensure earlier warnings of any temperature rise in the storage tanks. These actions demonstrate that UCC realized, in hindsight, how irresponsible it had been in Bhopal and was taking steps to make sure a disaster of similar magnitude would not happen in the USA. If Bhopal had had these available systems in place from the beginning, workers would have seen something was wrong in the MIC unit and the disaster could have been averted.

The Case Against Warren Anderson

Warren Anderson, who was UCC’s CEO from 1982-1986, had been one of the members of the select Management Committee, which approved the addition of the MIC project in Bhopal in the early 1970s. As both Chairman of the Board and CEO, Anderson was directly involved – he approved and ratified the double standards in design, safety and operations which Union Carbide imposed at the UCIL factory, and which created inferior and inherently dangerous conditions compared with those it chose to establish at its Institute, West Virginia factory. Anderson was personally aware of and involved in the cost cutting measures instituted by Union Carbide’s “Bhopal Task Force” to salvage the plant’s financial viability, which in turn caused the disaster.

Anderson also exercised managerial control and supervision over the operations of UCIL indirectly, using a single employee to act as intermediary: the Director of Union Carbide’s Agricultural Products Corporation, who was also a UCC Executive Vice-President, managed and supervised the Bhopal plant and answered directly to Warren Anderson.

There was prima facie evidence – meaning it is apparent based on the facts – that Anderson knew or should have known about safety conditions in the Bhopal plant and failed to take remedial action before the disaster occurred. Carbide policy states that the CEO is to be notified whenever a serious personal injury or fatality to a Carbide worker occurs. Anderson was informed or should have known about Ashraf Khan’s 1982 death at the Bhopal plant from a gas leak. The response to that death was to send a safety audit team to Bhopal, once again with the knowledge of the CEO. The 1982 Safety Audit report written by C.S. Tyson was sent to the CEO’s office for remedial action, but the recommended actions were not taken.

In 2002 the prima facie evidence was substantiated – in 1999 survivors filed a class action law suit against Union Carbide and Warren Anderson in the Federal Southern District Court of New York. During the discovery process of the case, UCC internal documents were released to the survivors and their lawyers. These documents revealed without a doubt that senior Carbide officials, including Warren Anderson, not only knew about design defects and potential safety issues with the Bhopal factory – they actually authorized them.

In December 1984 Anderson flew to Bhopal. He: