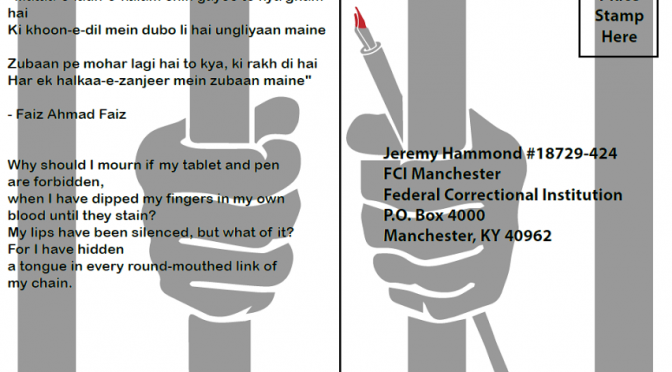 We stand in solidarity with political prisoner, Jeremy Hammond. As part of a postcard blitz to Jeremy, survivors of the Bhopal gas disaster and supporters are sending Jeremy postcards in prison. Please contact us at justice@bhopal.net if you are interested in participating in this important campaign.

Why should I mourn if my tablet and pen are forbidden,
when I have dipped my fingers in my own blood until they stain?
My lips have been silenced, but what of it?
For I have hidden a tongue in every round-mouthed link of my chain. 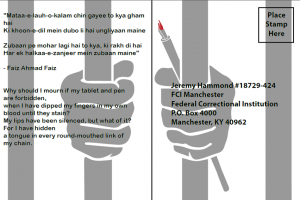 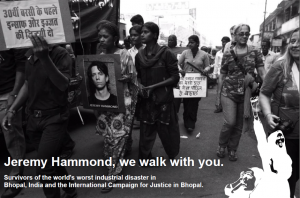 To add further insult to injury, Dow is now suing dozens of these activist groups for 25 million Indian rupees! This shows how profiteering multinational corporations like Dow will abuse the courts and influence international conventions so that they can continue to attack worker conditions, fair wages and environmental regulations. The UN, of which Dow sits as a Foundation member, has turned a blind eye to this human rights disaster for 30 years.

Justice will not be found in their courts so we must bring it to them in the streets. Dow’s recent tactics of desperation shows how they are worried that these activists are succeeding in bringing attention to their crimes.