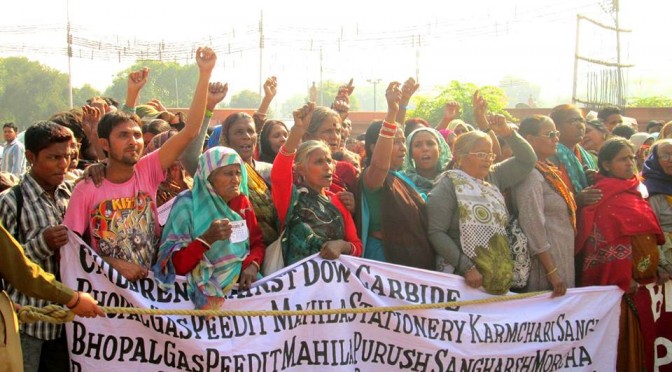 23 years ago, I heard a huge explosion outside my window in Seadrift, Texas. It was the Union Carbide factory. The explosion rattled windows twenty miles away and threw shrapnel the size of a car into the fields. It shook my house. One person was killed and 30 were injured–it could have been much worse.

A few weeks later I was on a plane to Bhopal, India, to meet the survivors of the Union Carbide gas disaster, whose lives were torn apart the night of December 3rd, 1984. They wanted to meet other activists campaigning around Union Carbide. 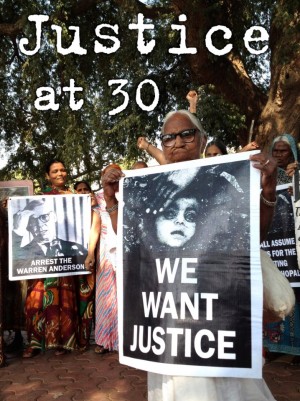 END_OF_DOCUMENT_TOKEN_TO_BE_REPLACED

We are calling on you for your support during one of the most critical points in the campaign, the 30th anniversary. Bhopal.net is a critical resource for the global solidarity movement for justice in Bhopal, and it NEEDS to be updated.

We currently have six websites and subsites with 2,500+ posts that need to be organized and combined so Bhopal.net can effectively tell the story of the gas disaster, the history of resistance and demands for accountability, and status of the current campaign.

This December marks the 30th anniversary of the disaster. We need one website, to tell many stories of the horrors that happened that night, so we can ensure that we live in a toxic free future.

Some people believe that after the 30th anniversary, movements start to die and people stop forgetting. One thing is for sure – we will not stop fighting until there is justice in Bhopal.

You are invited to view Arvind & Janani’s photo album: Henna for Bhopal

Raghav Kaushik writes: Here are the photos from the booth we held at the UW street fair yesterday and the day before.

We have raised a little more than $800. If we include matching contributions, it will in my estimate add around $500 more. That is excellent. Many thanks to all of you who volunteered to draw – the photos show the considerable skill you have. Thanks also to those who came to support us.

Inspired by the 19 year long struggle of Bhopal survivors, Blodsow — a 26-year old Chennai- based artist — has donated more than 25 paintings to an ICJB exhibition-cum-sale at Mumbai’s Hacienda Art Gallery, running for five days from 26th October. It’s hoped that the proceeds of the exhibition, which is entitled “Hope in the time of Alienation”, will raise seed funds for rehabilitation schemes to generate livelihoods among gas-affected young people and secure education for survivors’ children – many of whom suffer serious health and psychological problems as a result of hand-me-down poisons from their parents.

In his paintings, Blodsow, a self taught artist who works out of the studio of V. Vishvanathan at Cholamadalam Artists Village in Chennai, attacks the breakdown in society in which people are becoming more individualistic, prioritizing the self over the community. “Just as the fate of the Bhopal survivors essentialises the alienation that is rampant in today’s world, the struggle for justice by survivors of disaster essentialises hope and courage that keeps the world going,” says Blodsow. “My exposure to Bhopal also marks a positive turn in the mood of my paintings from Alienation to Hope.”

Sometimes sad, sometimes angry but always disturbingly thought provoking, Blodsow’s paintings dig deeper into the heart of urban morality, questioning the motives behind our actions. Blodsow has worked wonders with things we consider useless like mud and sand of the artist village (which form the base of most of his works), burnt pieces of wood and his own hair to name a few.

“This is a matter of mutual inspiration. Just as Blodsow was inspired by the struggle of Bhopal survivors, we’re kept going by the support and enthusiasm of people like Blodsow who not only feel the sufferings of those distant from themselves, but also take action in their own ways to help out,” says Rashida Bee of the Bhopal Gas Peedit Mahila Karmchari Sangh. Twenty years after the disaster, the economic, medical and environmental condition in Bhopal as far worse than during the immediate aftermath of the diasaster. “Even while the struggle to bring Union Carbide and its new owner Dow Chemical to justice is on, we have to take steps to ensure that the next generation has better opportunities and that there are jobs for the current generation,” she said.

It is hoped that the efforts will build a substantial corpus to initiate the much needed rehabilitation schemes. We welcome enquiries about purchase of paintings, and about offers to host exhibition-cum-fundraisers using the paintings around the world. For more information, contact: nity68@vsnl.com or Vinod Shetty, ph: 9820510146, Email: vinodshetty@hotmail.com

Please read more about the artist and see a selection of the paintings here.