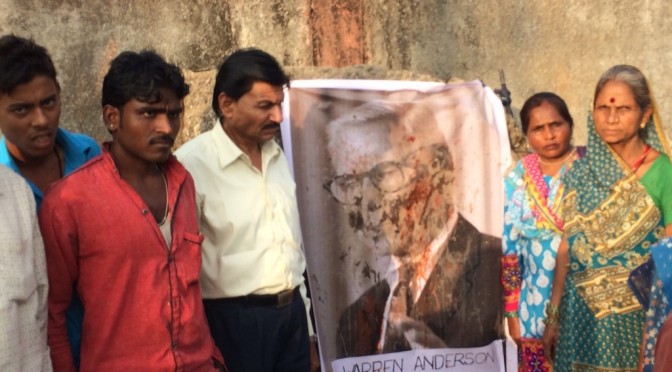 Five organisations working for the welfare of the survivors of the December ’84 Union Carbide disaster in Bhopal, today held a condemnation meeting on the news of the death of Warren Anderson, former chairman of the American multinational. Survivors from the worst affected communities who lost their family members to the disaster gathered outside Union Carbide’s abandoned factory to spit on an enlarged photograph of the deceased executive.

END_OF_DOCUMENT_TOKEN_TO_BE_REPLACED

Brought to you by:
The International Campaign for Justice in Bhopal, North America

US Judge rules in favor of The Union Carbide Corporation

As has been done on several previous occasions, Judge Keenan of the Southern District of New York recently ruled in favour of The Union Carbide Corporation (UCC) (a wholly owned subsidiary of Dow Chemical) on the issue of ongoing soil and groundwater contamination. This is despite evidence,  presented by the survivors’ US-based legal defense (EarthRights International, Sharma & Deyoung LLP, and the Law Offices of Curtis V. Trinko), proving that the Union Carbide Corporation played a central role in designing and maintaining their Bhopal plant.

This decision will be appealed in the Second Circuit Court of Appeals, which has previously reversed several of Keenan’s prior dismissals of cases against The Union Carbide Corporation.

END_OF_DOCUMENT_TOKEN_TO_BE_REPLACED

Our partners at Amnesty International USA are holding a rally on Tuesday, June 24, 2014 at Dow Chemical in Washington, DC to urge the company to comply with a summons issued in the ongoing criminal case concerning the 1984 gas disaster in Bhopal, India. The Chief Judicial Magistrate of Bhopal has summoned Dow to appear on July 4, 2014 for a hearing in Bhopal.

END_OF_DOCUMENT_TOKEN_TO_BE_REPLACED

On the occasion of International Women’s Day, and in light of the Millennium

Development Goals (MDGs), which emphasize the importance of improving maternal/reproductive health, The International Campaign for Justice in Bhopal (ICJB) wishes to draw your attention to the ongoing plight of women impacted by the Bhopal gas disaster. December 3, 2014 will mark 30 years of the Bhopal gas disaster and an extraordinary struggle for justice led by ordinary Bhopali woman. Noting that people everywhere are susceptible to the contamination of their bodies and environment by toxins, these women have called for an end to Bhopal-like disasters worldwide.

On behalf of the women of Bhopal, we urge all relevant agencies of the United Nations to heed the SHE imperative and intervene in the resolution of the humanitarian crisis in Bhopal, India, that has been neglected by both the Indian government and the Union Carbide Corporation (now owned by The Dow Chemical Company). ‘The World’s Worst Industrial Disaster’, the gas leak in Bhopal took the lives of approximately 7,000 people within the first week, and has resulted in 25,000 deaths to date. Over half a million people continue to suffer chronic health issues, as well as the debilitating effects of groundwater and soil contamination from Union Carbide’s abandoned pesticide factory.

In advocating for a much-needed corrective to the MDGs, United Nations Women (UN Women) have sought to address violence against women in its many forms such as sexual assault, femicide, trafficking and the suppression of reproductive rights. Poor women in many parts of the world have been demanding that governments and non-state actors stop the violence unleashed on their living and working environments. This is also violence against women. Toxic environments disproportionately affect women’s reproductive health and fetal development. In Bhopal too, reproductive health problems were identified soon after the disaster. A study carried out by Medico Friend Circle (1985) found that in J.P. Nagar (one of the most severely affected communities), “[w]omen in the reproductive age group reported menstrual irregularities such as shortened menstrual cycles, altered pattern of discharge”. Moreover, “nearly half of the nursing mothers in J.P. Nagar reported a decrease or complete failure of lactation.” Nine months after the disaster, Varma (1987) found that of “the 3270 families surveyed [in the communities adjacent to the plant], 865 women reported that they were pregnant at the time of the accident; 43.8% of these pregnancies did not lead to the birth of a live baby. Of the 486 live births, 14.2% of infants died within 30 days.

Two decades after the disaster, studies found that gas-affected women and their female children were commonly experiencing menstrual abnormalities, including “chaotic” menstruation, leucorrhoea and premature menopause. In addition, significantly higher rates of developmental disabilities and birth defects have been found amongst children born to exposed parents and/or living in the communities facing groundwater contamination. These health impacts from the disaster have also had social implications for gas-exposed women. Many refuse to marry from gas-affected communities citing the inability of women to bear healthy children and the financial liability they might pose due to the high incidence of chronic illnesses in the area. Furthermore, research on the impact of the disaster on women’s reproductive health has been severely lacking. As a result, the women of Bhopal are doubly burdened, receiving largely symptomatic and temporary treatment for their health problems.

Our previous letter outlined several ways in which the UN can be involved. In addition to these, we urge UN Women, The United Nations Association USA and The UN Foundation to respond to the SHE imperative and work to address the exclusion of environment-related reproductive health issues from the UN’s definition of violence against women and girls. In particular, we urge UN Women and The World Health Organization (WHO) to commission studies on the effects of toxic exposure on Bhopali women’s reproductive health and also call on the Government of India and The Dow Chemical company to commit to Bhopal’s SHE imperative.

On behalf of The International Campaign for Justice in Bhopal, North America (ICJB-NA),

To add further insult to injury, Dow is now suing dozens of these activist groups for 25 million Indian rupees! This shows how profiteering multinational corporations like Dow will abuse the courts and influence international conventions so that they can continue to attack worker conditions, fair wages and environmental regulations. The UN, of which Dow sits as a Foundation member, has turned a blind eye to this human rights disaster for 30 years.Justice will not be found in their courts so we must bring it to them in the streets. Dow’s recent tactics of desperation shows how they are worried that these activists are succeeding in bringing attention to their crimes.