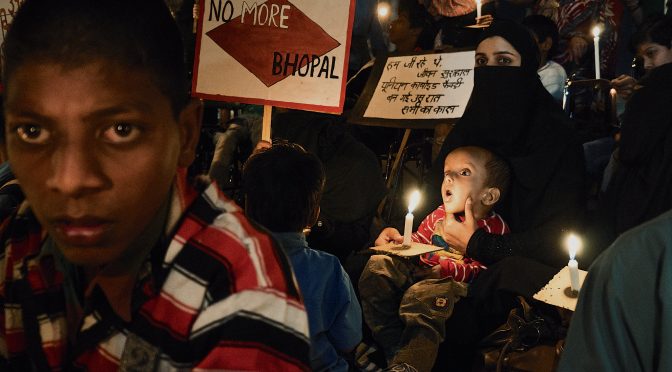 Addressing a press conference today, four organizations campaigning for justice on the Union Carbide disaster in Bhopal charged the central and the state governments of continued collusion with Union Carbide and its current owner Dow Chemical. To support their charge, the organizations presented documents obtained under RTI on the suppression of findings of a study by the Indian Council of Medical Research (ICMR) that could be used to substantiate the Curative Petition for additional compensation for the disaster.

“The documents we have obtained from NIREH (National Institute for Research on Environmental Health) this year show that its parent organization, the ICMR decided to not publish the results of a study that found birth defects in babies of gas exposed mothers to be several times higher compared to those of non-exposed mothers.” said Rachna Dhingra a member of the Bhopal Group for Information and Action.

As per the documents Dr Ruma Galgalekar, the principal investigator found that 9% of the  1048 babies born to gas exposed mothers had congenital malformations while in 1247 babies born to unexposed mothers, only 1.3 % had congenital malformations. The study costing little over 48 lakhs was carried out from January 2016 to June 2017 following approval by three successive meetings of the Scientific Advisory Committee (SAC) from December 2014 to January 2017.

The documents further show that when the findings of the study were presented at the 7th SAC meeting in December 2017 “Members expressed concern on the high incidence of malformed children recorded in the present study and raised several queries related to quality control of data.” following which it was decided that an Expert Group would review the data.

As per the minutes of the Expert Group’s meeting on April 4, 2018, the “Group strongly recommended that this data, due to its inherent flaws, should not be put in public domain and shared at any platform.” According to the four experts, the “inherent flaws” of the study were “various methodological issues, problems of invalidated data and outcome assessment bias.” At the 8th SAC meeting in October 2018 the members agreed that “as the said project had flaws…the results are erroneous and thus should not be brought in the public domain.”

Rashida Bee, President of the Bhopal Gas Peedit Mahila Stationery Karmchari Sangh said “These documents on research on the impact on next generation of survivors make us lose faith in our scientists and scientific institutions. If the study design was indeed flawed, how was it approved at three successive meetings over two years? If indeed mistakes have been made, why hide them from people? And why has there been no fresh proposal to do the study properly?”

Citing another RTI document, President of the Bhopal Gas Peedit Mahila Purush Sangharsh Morcha, Nawab Khan said “it is ironical that six months after this quiet burial of the data on birth defects due to gas exposure, at a meeting on the Curative Petition for enhancement of compensation for the gas disaster in New Delhi, Supreme Court Advocate arguing for the Petition specifically sought “corroborative evidence like data on effect of Bhopal gas leak disaster on offspring of Gas Victims..”

Images by Giles Clarke (On the 28th Anniversary)

“In the documents we have got on research on birth defects, there is no mention of what was done to help the 110 babies who were found to have birth defects” “We have other documents that show that back in 1994 – 95, over 70 thousand children in gas affected areas were examined and 2435 of them were identified with congenital heart disorders alone. Records show that only 18 of these children got help from the state government, what happened to the rest? The ICMR and the state government must answer these questions.” said Nousheen Khan of the Children against Dow Carbide.