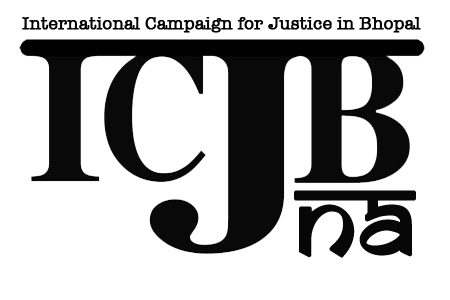 This Newsletter is brought to you by
The International Campaign for Justice in Bhopal, North America

1.  A message of solidarity from hacktivist, Jeremy Hammond

1.  A message of solidarity from hacktivist, Jeremy Hammond!

On February 27th, 2012 WikiLeaks began to publish hundreds of e-mails that exposed DOW’s involvement with the global intelligence agency Stratfor. It became clear that DOW was spying on the Bhopal Campaign, but this came with a price, including the freedom of one brave man named Jeremy Hammond.

Jeremy was at the forefront of using the information from Stratfor to expose DOW, and has since been sentenced to 10 years in prison. Hammond recently released a statement of solidarity to ICJB.

“Two years ago I hacked the intelligence company Stratfor and handed over all of their private email correspondence to WikiLeaks for publishing. Amongst the revelations was proof that Dow hired Stratfor to monitor the activities of Bhopal survivor activist groups.” Read full article here

On February 10th, ICJB activists in India were required to appear in a Mumbai court to face chargesfrom the Dow Chemical Company! Imagine, the company that gave us Napalm and Agent Orange is suing activists who have non-violently struggled for a clean environment, clean water, healthcare, social and economic rehabilitation, proper compensation and other basic rights. We asked all those who are outraged by this to question Dow on why it is suing these activists, why it has not taken responsibility for the Bhopal gas disaster, and why Dow won’t accept the summons issued by the Indian courts.

On the occasion of the United Nations Social Justice Day, ICJB launched our year-long United Nations campaign. The Bhopal gas disaster has reached its 30th year, and has gotten significantly worse for the affected communities. We ask:

(1) Why the United Nations has been silent on the ongoing plight of the victims of the Bhopal gas disaster, and;

(2) Why it has chosen to partner with the Dow Chemical Company, which in purchasing the Union Carbide Corporation (UCC), has inherited the legal liabilities of the Bhopal gas disaster.

Finally, we ask that UN agencies be involved in easing the plight of survivors, and specifically for technical assistance from UNEP for the scientific assessment of the contamination of soil and groundwater in and around Union Carbide’s abandoned factory in Bhopal, India.

We continued our year-long UN campaign on International Women’s Day. Our letter calls for an expansion of the definition of violence against women to include the impact of toxic environments on women’s reproductive health, urges UN Women and The World Health Organization (WHO) to commission studies on the effects of toxic exposure on Bhopali women’s reproductive health, and calls on the Government of India and The Dow Chemical Company to commit to Bhopal’s SHE imperative. Please click here for the full letter.

This year marks the 30th anniversary of the Bhopal disaster. A worldwide relay fast has been put into action for 365 days to show our solidarity for the survivors and activists in the ongoing disaster in Bhopal.

Please sign this petition, which expresses our disappointment at Trailblazers’ collaboration with The Dow Chemical Company on the ‘Multiply the Message’ campaign. Don’t let Dow get away with greenwashing their image. Watch the video here!

As the 30th anniversary approaches, we need your time and effort to put pressure on DOW.

We are seeking support in the following voluntary, work-from-home positions:

Apply for any of the intern positions by e-mailing icjb.us.ab@gmail.com with your resume and cover letter.

Apply for the DOW action coordinator by e-mailingicjb.us.ab@gmail.com with a response to the following questions.

A) Why do you want to be a member of the Advisory Board?

B) What will you bring to the Advisory Board and the campaign?

The ICJB North American Advisory Board