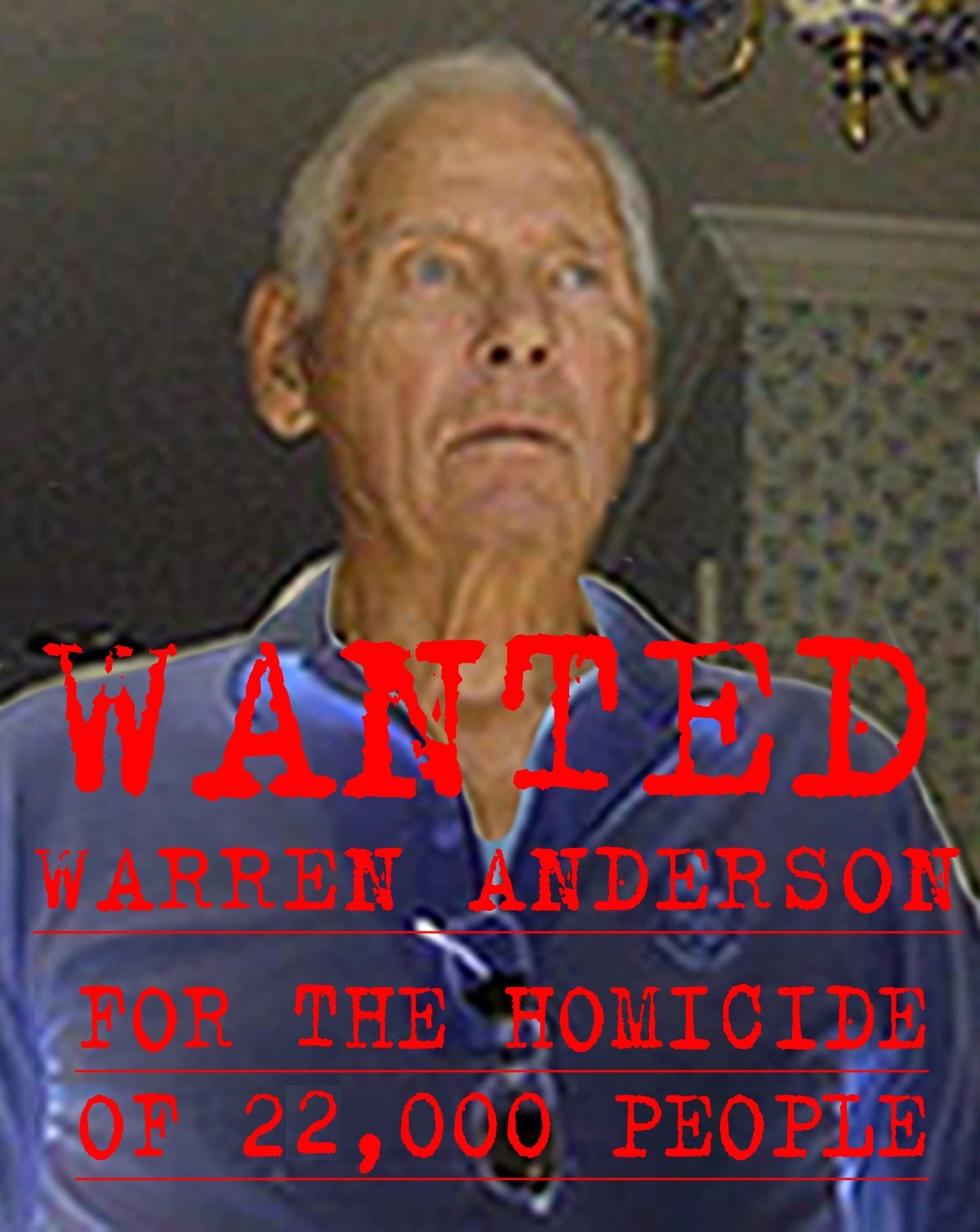 BRIDGEHAMPTON, LONG ISLAND, SEPTEMBER 8, 2002: Ex-Carbide CEO Warren Anderson is clearly startled by all the media attention focussed on him since a court in Bhopal reaffirmed on 28 August that he is wanted for the homicide of 20,000 Bhopalis, and called for his immediate extradition.

Warren has been ignoring the court’s summonses and Interpol’s arrest warrant for more than a decade. How is it, Channel 4 asked last week, that US authorities have apparently been unable to trace him, when it turns out he has been living openly at his house in Long Island’s exclusive Hamptons district? (Channel 4 found the address, incidentally, on our website.)

Mrs Lillian Anderson, caught by Channel 4’s reporter as she drove her silver Cadillac into the couple’s $1,150,000 home -which stands on a white sand beach on the Atlantic ocrean – did not want to talk. She said huffily, “My husband flew to India and they put him in jail”. In fact, Warren Anderson spent three hours under nominal ‘house arrest’ at Carbide’s luxury guest house. He was freed on a surety of $1,500 and left for America, promising “I will come back to India whenever the law requires it.”

But when the law required it, he said he did not recognise the court’s jurisdiction. He never returned.

How inconvenient -“We’ve got people coming to dinner”

Did Warren Anderson have anything to say about the 20,000 people who have died in Bhopal as a result of Carbide’s gas leak? He did not. Instead his wife testily told Channel 4’s reporter, Zoe Conway, “This is most inconvenient. We’ve got people coming to dinner.” Pressed to ask her husband to say what his current feelings were on the continuing suffering of more than 130,000 people in Bhopal, Mrs Anderson snapped, “I told you, we are giving a dinner party, and it isn’t even catered”

We learned of these comments in a telephone call from a friend – they prompted us to do a bit of finding out about the Andersons’ lifestyle.

Long Island’s Hamptons are an expensive part of the world. Steven Spielberg has a house there. “Meg Ryan was at Sunset Beach on Shelter Island on Saturday night having dinner,’ gushed a recent issue of New York Metro magazine. “Helena Christensen is always there, Liv Tyler is always there, and socialites like Lulu de Kwiatkowski always turn up. The locals have nicknamed some of the customers the boat people, because they all come over on their incredible boats, and they leave $300 tips.”

So what is a dinner party in the Hampton’s like? What sort of shopping might Mrs Anderson’s Cadillac have been carrying home?

Not part of the real world.

“I have to tell you, we’re not part of the real world,” said Bridgehampton’s society caterer Brent Newsom, when we put these questions to him. “It costs to live here.”

It would seem that Lillian Anderson is used to having her dinner parties catered. A Newsom dinner for eight people could easily cost over $1,000. At a recent seven-person lunch attended by the Governor of New York, the food cost $800. There were two staff at $350 and flowers at around $250.

The client generally provides the wine, because New York licensing laws mean a caterer would have to charge restaurant prices, say $100 for a bottle of wine that cost $30 in the shops.

Perhaps Lillian had been over to the Amagansett Wine Store, where they do a decent Latour Pouilly Fuisse for $22 a bottle, and a Paumanok 2000 Sauvignon Blanc, a local version of a Sauterne for a mere $80.

What would she be cooking? Well, beef would be a usual choice for a smart dinner party, but of course it’s red meat. Although Warren appears fit for his age, he has to take care of his health.

Long Island lobster will be off the menu. The lobsters have been poisoned, probably by pesticides.

Lobster, in this area of stunning seascapes is a favourite food. It’s delicious, low in fats and not particularly high in cholesterol.

“I call ahead and have Southampton’s Clamman cook my lobsters,” says local resident Jamee Gregory, adding, “I don’t like to hear them scream.”

In Vero Beach, Florida, where the Andersons have their other holiday home, P.V.Martin’s Oceanside restaurant, famous for its “champagne brunch” does giant Florida lobster tails at $30, but in the exclusive Hamptons, a local told us, “Places that serve lobster do not have the prices on the menu.”

Eight jumbo-sized lobsters for a dinner party would cost about $240. But fishermen report a “widespread lobster die off”. The suspected cause: pesticides like those made by Union Carbide.

Many Long Islanders are partial to tomalley, the pale green stuff found in the lobster’s body, but local Lobster Promotion Councils advise against eating it, warning that as tomalley is the liver and pancrea, dioxins might have entered the system from the environment. Ironically, the dioxins enter the environment courtesy of Dow Chemical, which bought Warren’s old company, Union Carbide.

On second thoughts, Warren and Lillian wouldn’t eat those lobsters anyway. Pesticides can do awful things to your health.

Lillian can find fruit and vegetables at the Scuttle Hole farm shop, just a quick dash from her house up to the top of Ocean Road and a jink across the Montauk Highway.

Brent Newsom thinks its worth going further afield.”If I want really good field-ripened tomatoes, I go to to Round Swamp in East Hampton. They grow almost everything they sell, and their corn is fabulous. It’s fresh organic produce untouched by herbicides or pesticides,” Sounds wonderful. “But”, he admits, “it is très cher.”

Très cher, too, are the butchers, but of course the meat is simply the best.

“Dreesen’s in East Hampton is good, and the shop delivers – it’s a fabulous if you don’t mind paying $18 for veal scallopini.”

So, uncatered, how much at minimum must Lillian Anderson’s dinner party have cost?

Perhaps $40 on nibbles from somewhere inexpensive like Gemelli’s of Babylon – you wouldn’t want to be fussed with them yourself. $160 for the meat, because you want the best, and another $40 for the très cher vegetables. Four bottles of Latour Pouilly Fuisse, $88 and the Paumanok at $80.

Cheeses? “I can only afford Sagaponack’s Loaves & Fishes once a month,” one local complains. “It seems like it’s $20 for a quarter-pound of anything.” $80. Dessert? Fresh fruit, enough for eight, $40. Flowers? $0 from the garden – after all why else keep three gardeners? And the total is $528.

A world away from Lillian’s $500 bash: Leela Bai’s dinner party in Bhopal.

In her shack, lit by a single dim bulb, Leela Bai prepares dinner for her family. She is the same age as Warren Anderson and like him, has to watch her health. It’ll be rice again tonight, the same as last night, seasoned with a little salt. Rice costs 9¢ a pound in Bhopal.

There is nothing else in the house. Occasionally there will be a some daal (lentils), and perhaps some spinach (4¢ a pound). When hunger becomes unbearable, they tie scarves tightly round their bellies to give the illusion of fullness.

Leela was one of those caught by Union Carbide’s cloud of poison gas nearly eighteen years ago. She recalls the terror of “that night”, waking with eyes and mouth burning, every breath like inhaling acid. The panic in the narrow lanes, when people were trampled. People choking and dropping dead, with bloody foam bubbling from their lips.

Burdened by injury they cannot earn well. The family’s joint income is $30 a month.

Monsoon rains wash toxins from the factory into the groundwater. Drinking wells are polluted by carcinogens and heavy metals, including 20,000 to 6 million times the expected levels of mercury.

With their meal, Leela and her family will be drinking not wine but water. Mind you this is no ordinary water.

It’s Chateau Carbide, laced with chemicals leaching into the ground water and wells from the toxins dumped by Carbide for years before and after the gas leak. Piles of dangerous chemicals are still lying in the abandoned factory. Each monsoon’s rains washes them into the soil and groundwater.

Greenpeace analaysed the drinking water of communities like Leela’s who live the near the factory. They found chemicals capable of causing cancers, leukemia, damage to vital organs and birth defects. People who drink the water report symptoms like those who were gassed in the original disaster.

French writer Dominique Lapierre, whose book Five Past Midnight in Bhopal demonstrates how Union Carbide’s neglect led inexorably to the disaster, drank a half glass of the water and reported:

“My mouth, my throat, my tongue instantly got on fire, while my arms and legs suffered an immediate skin rash. This was the simple manifestation of what men, women and children have to endure daily, eighteen years after the tragedy”.

Warren Anderson probably spent more in one night than his victims got ‘in compensation’ for a lifetime of torture.

For the gas victims of Bhopal every day of the past eighteen years has been a struggle against breathlessness, nausea, brain damage, cancers, fevers, numbness, panic attacks, menstrual chaos, monstrous births. Yet of those who have received any compensation, ninety percent got less than $500.

Leela got just $208. “No one in my family received more than that”, she told us. “The money went on medicines as soon as it came to our hands.”

Over eighteen years $208 works out at just 3 cents a day and with each day that passes, its value dwindles. – which is why the case must not be stalled any longer. The survivors demand that Anderson and Union Carbide (now a wholly owned subsidiary of Dow Chemicals) must no longer be allowed to obstruct justice.

The poor and the hungry of Bhopal live in the real world. Mr Anderson does not

Last week, he was annoyed when Bhopal came knocking at his door in the idyllic Hamptons and held up his smart dinner party. How ironic is that from a man who has been holding up justice for thousands of poor, sick and hungry people for eleven years?

Three days ago the Indian Government finally announced that it will seek Warren Anderson’s extradition from the US.

He and his wife must have been hoping Bhopal had gone away. But Bhopal will never go away. Not until there is justice.

Additional reporting by Farah Khan in Bhopal and Sarvadarshi in Bridgewater • bhopal.net @nti-copyright for activists © for everyone else