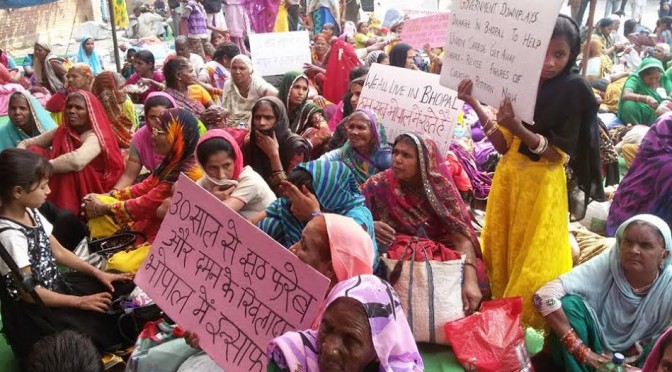 Five women survivors of the Union Carbide disaster in Bhopal today began a fast in Jantar Mantar, New Delhi along with a thousand survivors and their children sitting in a dharna.

Five Bhopal based organizations that are jointly leading the protest called on the Prime Minister and the Minister of Chemicals and Fertilizers to correct the errors of the previous government on the issue of compensation for the gas disaster.

The survivors are demanding additional compensation for all affected people and revision of figures of death and lingering injury caused by the disaster 30 years ago.

Rashida Bee, President of the Bhopal Gas Peedit Mahila Stationery Karmchari Sangh said, “In 2010 the Group of Ministers on Bhopal decided to pay additional compensation of Rs. 1 lakh but left out as many as 93 % of the survivors without any scientific or legal basis. We are calling upon this government to correct that and pay additional compensation of Rs. 1 lakh to all those affected by the disaster.”

“As per the decision of the GoM on Bhopal, the central government filed a Curative Petition seeking additional compensation from Union Carbide and its current owner Dow Chemical in December 2010. But the figures of death and extent of injury caused to the victims were grossly downplayed.” said Balkrishna Namdeo of the Bhopal Gas Peedit Nirashrit Pensionbhogee Sangharsh Morcha.

Said Nawab Khan, President of the Bhopal Gas Peedit Mahila Purush Sangharsh Morcha, “The government’s apex research agency, the Indian Council of Medical Research had reported that over 12000 people died due to the disaster till 1993. But when it came to seeking compensation from the American corporations the government said that the number of dead was only 5295.”

The organizations said that they had had a purposeful meeting with the Minister of Chemicals and Fertilizers in Bhopal recently. “Mr. Ananth Kumar showed much interest in understanding why and how so many survivors were being discriminated against.”said Satinath Sarangi of the Bhopal Group for Information and Action.

According to Safreen Khan founder of the Children Against Dow Carbide “The people of Bhopal who have come for the protest have got only Rs. 25 thousand as compensation and many of them have to still visit hospitals for the diseases caused by the disaster.”