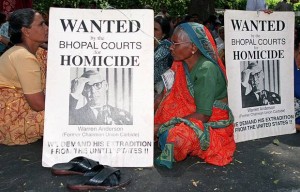 He reportedly died at a nursing home in Vero Beach, Florida, although his family have not yet confirmed his death.

Anderson was CEO of US chemical company Union Carbide, responsible for a gas leak that killed over 10,000 people in Bhopal, India in 1984.

The company’s plant leaked 40 tonnes of poisonous gas into the surrounding city in what is considered the world’s worst industrial disaster.

More than 555,000 people who survived are thought to have suffered after-effects, and many have died from gas-related illnesses, such as lung cancer, kidney failure and liver disease.

Anderson visited Bhopal four days after the accident, where he was immediately arrested. He paid bail, but left the country soon after before he could face trial.

The Indian government has made numerous attempts to extradite him, but never succeeded. He was officially labelled a fugitive, and a judge called him an “absconder”. In 1986, at age 65, he retired from Union Carbide.

In 1989, Union Carbide paid $470 million to the Indian government over the disaster, but the public still called for Anderson’s arrest.