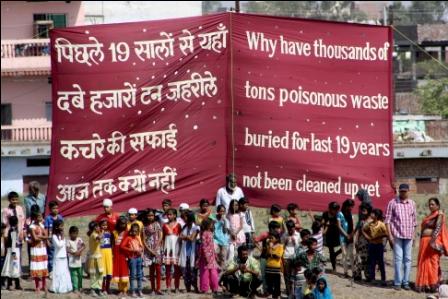 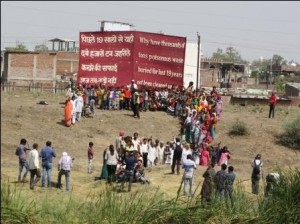 At a press conference today leaders of five organizations fighting for the rights of the survivors of the 1984 Union Carbide disaster in Bhopal demanded straight answers from concerned ministers on the secret transport & disposal of hazardous waste from the Union Carbide factory.

The organisation charged the Dept of Gas Tragedy Relief & Rehabilitation, Madhya Pradesh government of violating the directions of the Supreme Court regarding the disposal of the waste and endangering the lives and health of neighbourhood residents of Pithampur.

The organisations expressed regret that instead of focusing on the vital task of scientific assessment of the contaminated area around the abandoned factory, the governments at state and center are causing Bhopal like disasters through thoughtless actions.

Rashida Bee, President of Bhopal Gas Peedit Mahila Stationery Karmchari Sangh said “In September 2010, the then state environment minister had objected to the disposal Union Carbide waste at Pithampur on the basis that it would lead to the contamination of the Yashwant Sagar reservoir; the source of drinking water for all of Indore. We want to ask him what is currently being done to protect Indorian’s water from getting contaminated.”

Balkrishna Namdeo, President of Bhopal Gas Peedit Nirashrit Pensionbhogee Sangharsh Morcha      demanded to know from Mr. Babulal Gaur, the then minister of Gas Relief, the steps that had been taken to address his serious doubts regarding the capability of Pithampur facility to handle Bhopal waste. In the Group of Ministers meeting held in October 2012, Mr. Gaur was opposed to any decision on test incineration of Bhopal waste in Pithampur as he believed the facility here ranked among the lowest in the country.

Nawab Khan of Bhopal Gas Peedit Mahila Purush Sangharsh Morcha also demanded to know what steps had been taken by the Department of Gas Relief to alert and protect neighbourhood residents and factory workers who were identified as potential victims in the event of incineration as per its own affidavit filed before the Supreme Court in February 2013. 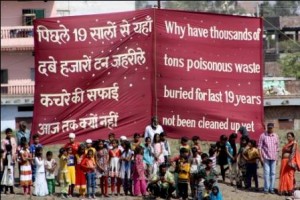 Rachna Dhingra of the Bhopal Group for Information and Action expressed apprehension that the directions of the Supreme Court with regard to the ongoing test incineration were being violated. She says that there is nothing to show that the entire operation has been and was being videographed. She expressed particular concern with the absence of monitoring of dioxin and furans that only CPCB expert is capable of who is not on the scene.She pointed out that during the incineration trial runs at Pithampur, people of the area were exposed to dangerous levels of dioxins 6 out of 7 times.

Safreen Khan of Children Against Dow-Carbide pointed out that the disposal of waste at Pithampur was not protecting Bhopalis from Union Carbide’s poisons which are in the soil and ground water. She presented qualitative reports that show the contamination in the ground water has spread much beyond the 22 communities that the Indian Institute of Toxicology Research, (IITR) had marked as contaminated in 2012.