On December 3rd, several Bhopal supporters and members of the Association for India’s Development (Milwaukee) visited the home of Dow Board member James Ringler: 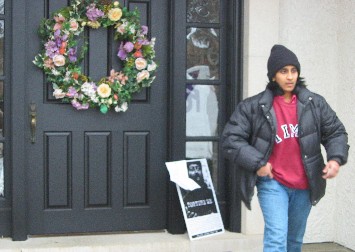 Ashish (from AID Milwaukee), Satish and I (from Waukegan) left for Ringler’s house around 9am. We reached Ringler’s house around 9:15am and rang the bell. Waited for a few seconds before the door was opened by Ringler’s daughter. She said -‘You must be looking for my Dad’, for which we responded yes. We were told that he is out of state, gone to Florida and is not expected back for another few months. We told her that we wanted to give him the poster board and she said she could not accept it. We said we would leave it at the door, for which she told us that she would throw it out right away and that it was no use. We stood firm that we were going to leave it there anyway (she seemed a bit taken aback by this). After this we handed out the letter (which consisted of the ICJB demands) and said we wanted to give Mr. Ringler this letter. She again said that she could not take anything from us to give him and closed the door. We pinned this letter to the poster board and left right away. While we were there a FedEx truck pulled in to their house and she signalled to the FedEx delivery person to wait till we were gone. As we left the house gates, we saw her reopening the door for the fedex person.
No Ringler, a bit disappointing!

A few questions that bothered us on our way back
– Was Ringler really away or was he in the house? There is no way of knowing.
– Will his daughter let Ringler know that we were there? Perhaps yes.
– Will she give the letter/poster reach Ringler? We don’t know. We thought that we could post a same letter to Ringler, to ensure that he knows we were there and that we delivered this letter to him.
All in all a few things to think about.
——————————————————————
Letter to Mr. Ringler
December 3rd, 2005
Dear Mr. James Ringler and all DOW Board of Directors,
We include below a transcript of a letter that was delivered to Mr. Ringler’s residence in Lake Forest IL, on December 3rd by supporters of the campaign for justice in Bhopal.
December 3rd is the anniversary of the chemical disaster that occurred in Bhopal 21 years ago in 1984. On this occasion we would like to remind you of the responsibilities towards the people of Bhopal. As Dow’s Board of Directors you have the power to change the situation in Bhopal. We urge and demand that you to use it to
– CLEAN UP THE POISON: Clean up toxic wastes and contaminated groundwater in and around the Union Carbide factory site. Provide safe water to the community, and just compensation for those who have been injured or made ill by this contamination and/or have had their property damaged.
– Submit Union Carbide for TRIAL: Ensure that Union Carbide and Warren Anderson present themselves in the Indian courts, and cease to abscond from the Chief Judicial Magistrate’s court in Bhopal.
– PROVIDE LONG TERM HEALTH CARE: Provide for medical rehabilitation of the persons exposed to toxic gases and contaminated groundwater and their children. This includes medical care, health monitoring and necessary research studies. The company must provide all information on the health consequences of the leaked gases and contaminants in the ground water.
– PROVIDE ECONOMIC AND SOCIAL SUPPORT: Provide income opportunities to victims who can not pursue their usual trade as a result of exposure-induced illnesses and income support to families rendered destitute due to death or incapacitation of the breadwinner of the family.
In solidarity with the people of Bhopal,
Students for Bhopal (www.studentsforbhopal.org)
International Campaign for Justice in Bhopal (www.bhopal.net/icjb.html)